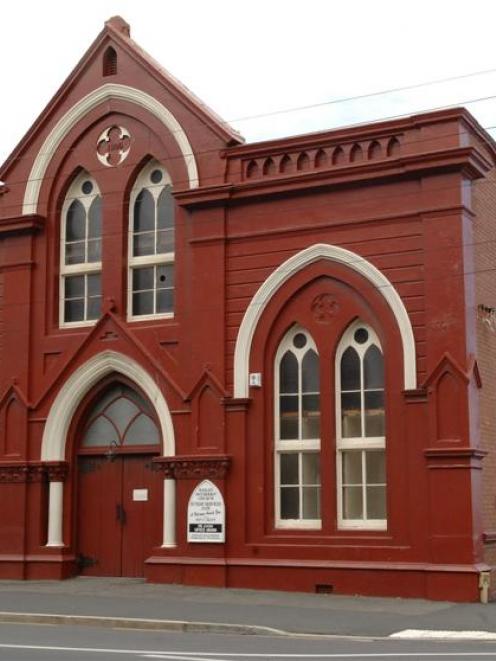 The Methodist church on the corner of Wesley St and Hillside Rd, Dunedin. Photo by Linda Robertson.
Opposition to a plan by the Methodist Mission to demolish its church on Hillside Rd has found little support, and some strong criticism from a Dunedin City Council planner.

Planner Lianne Darby has taken the New Zealand Historic Places Trust (NZHPT) to task for its suggestion the mission had a "total disdain" for its historic foundation in South Dunedin.

Ms Darby said instead it was the trust that had little understanding of the church's values and work over the past 120 years.

Ms Darby's report to a resource consent hearing to be held on Wednesday suggested the hearings committee grant consent to the mission's proposed new $5.6 million social services complex on the site.

The application received 31 submissions, 21 in support, nine opposing and one neutral.

The trust's opposition to demolishing the church, which it again indicated last month, has angered mission general manager Laura Black.

Ms Black said the "Victorian gospel hall" style building harked back to a time when people were lectured from the pulpit, and had no place in a modern facility. However, trust Otago-Southland area manager Owen Graham said it encouraged retention, or finding a new use for the church, as part of the adaptive reuse it recommended for historic buildings.

The trust's submission said the loss of the 1894 church would mean "an extinction" of its heritage values.

It considered the church to be of historical significance, despite not being listed by the trust or the council.

Ms Darby quoted the trust's submission in her report, which said the proposal showed "an abject bias about the building's image, and total disdain for the Methodist Church's historic foundation in South Dunedin".

She disagreed with that claim, saying "the church has a very good understanding of its own history, its heritage and its purpose in the community".

"It is my view that a church body is not defined by a church building any more than a family is defined by their house."

Ms Darby also noted the owners could legally demolish the church without consent, and its demolition only came before the committee as part of the wider application, which was non-complying because the building was in an industrial zone.

Because of that, the discussion was "somewhat academic".

The report found design, traffic, and other issues no more than minor in their effect.

A hearings committee of Dunedin city councillors Colin Weatherall, Andrew Noone and Richard Walls will consider the matter.