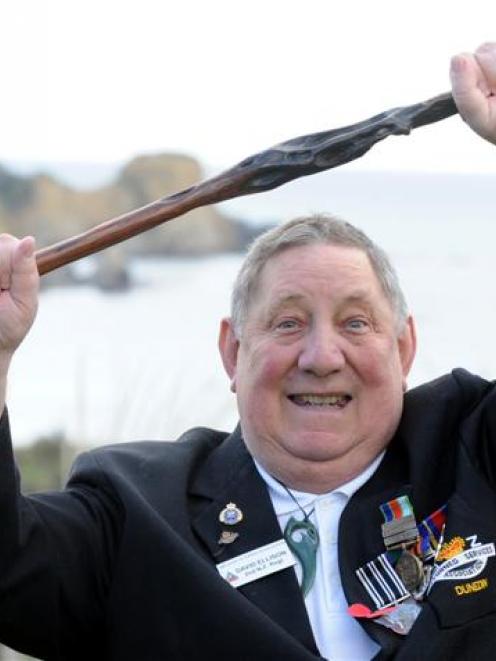 Veteran David Ellison has not only organised a ceremony to present defence service medals, he has improved his health so he can march with those receiving them. Photo by Stephen Jaquiery.
Two years of "life-reaffirming" work will bear fruit this weekend when 150 ex-servicemen and women from Otago receive their service medals at a ceremony in Waikouaiti.

Since he learned about the New Zealand Defence Service Medal (NZDSM), Karitane man David Ellison, upoko (chief) of Kati Huirapa Runaka ki Puketeraki, has been helping people apply because he feels "obliged" to help those who served in the military, an institution he says has helped him all his life.

Mr Ellison, whose father was in the Maori Battalion and a prisoner of war and mother was in a women's auxiliary group, himself won a military scholarship to attend Te Aute College, then volunteered for compulsory military training before joining the territorials and the regular army to serve in Malaya.

"I had a lifetime of military and I love it. I wanted to do this for those eligible for the medals because they are the people who looked after me, when I was growing up and through my life.

The RSA has looked after me." He realised many people would not know how to get the medal, so he placed an advertisement in the Otago Daily Times, which was answered by about 300 people looking for information and help with applying for the medal.

About half of those will formally receive their medals at the ceremony Mr Ellison has organised in Waikouaiti tomorrow. The medals will be presented by Defence Minister Wayne Mapp, Chief of Navy Rear-admiral Tony Parr, Anzac of the Year Brigadier Dr Brian McMahon and former national RSA president John Campbell, the latter two both of Dunedin.

The oldest person to receive their medal at the ceremony is aged 89, with most others in their 70s and 80s.

Special appreciation certificates will be presented at the ceremony by Dunedin Mayor Dave Cull and Waitaki Mayor Alex Familton.

Since April, when the first applications were called for, more than 17,700 requests from around New Zealand have been received by the medals office for the NZDSM. More than 13,000 medals have been issued.

Mr Ellison said many people who had never had their military service recognised before were emotional and excited about receiving the medal.

And the experience of helping these people had been life reaffirming for him personally.

Because of ill-health over the past five years, he had found walking increasingly difficult, but this project had inspired him to get out walking, with the goal to walk unaided with the medal recipients as they marched into the Waikouaiti Events Centre tomorrow.

"This has given me new life. I've been out on the road every day, up and down the street. It's been great. I'm not going to rust out now - I'm going to wear out."

His efforts will culminate on a special day - tomorrow is also Mr Ellison's 75th birthday.