By Mike Houlahan
0 Comments
A fortuitous discovery in the former Cadbury factory offices has enabled the Hudson family to answer questions about its history it thought would remain mysteries forever.

The demolition crew levelling the one-time chocolate factory for its eventual replacement by the new Dunedin hospital, recently discovered 16 volumes of archives dating back to the Dunedin concern’s origins as Hudson & Co.

"I knew they should have been somewhere, because they are the minute books and the history of the company," Paul Hudson, a great-great-grandson of founder Richard Hudson and one-time Cadbury managing director, said.

"I had all of our original ones up until the end of the 1890s and I didn’t know what had happened to the other books - I assumed when Mondelez took over the company they had been sent to the appropriate place."

Instead the books were left to moulder in what was once former company secretary John Crawford’s office, in a cupboard which, providentially, was checked by demolition workers on a final walk through the building.

"We are very lucky that we have been able to recover these things. Hopefully, they will be able to go somewhere like the Hocken and be looked after."

They brought some family treasures of their own, including a portrait of Richard Hudson’s six sons (all of whom worked for the family firm) and a certificate of merit earned by the firm for its stand at the New Zealand and South Seas Exhibition held in Dunedin in 1925-26.

"We’ve been looking through the books this morning and finding out things we didn’t know. There’s a lot of historical material there which would have been lost had they not found it," Mr Hudson said.

While of enormous importance to the Hudson family, the books would have a resonance for the wider Dunedin community, many of whom would have been employed by or had ancestors who were employed by the firm, Mr Hudson said. 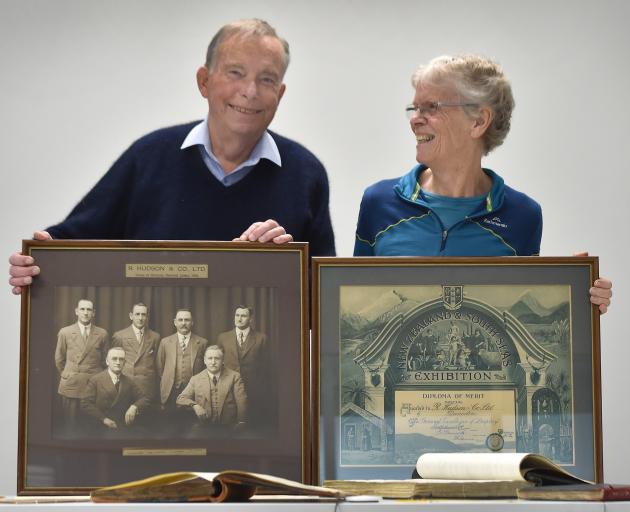 Former Cadbury executive Paul Hudson and family historian Jennifer Hudson reunite some of the Hudson memorabilia with the collection of Hudson & Co archives found during the demolition of the former chocolate factory. PHOTO: PETER MCINTOSH

The discoveries included a wage book, which recorded various generations of families who had worked for the firm.

"You got to know all the people in the office and the factory, and their children and grandchildren, and you were expected to remember their names.

"It was a unique business, not just in Dunedin but in New Zealand, for the long-term family associations... It was one of the biggest employers in the city and the loyalty of those workers and the way they were treated meant it was almost a home away from home for a lot of them."

Mr Hudson still deeply regrets the decision to close the factory and can barely bring himself to watch its demolition.

"I try to avoid driving past them, it’s very sad not just for me but for all the people who have worked there, and also for Dunedin people because it has been part of their lives for a very long time."