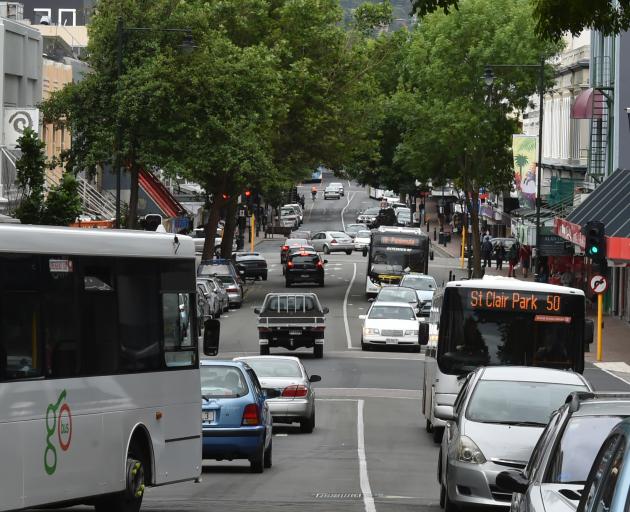 Buses on George St in Dunedin. Photo: Gregor Richardson
A free Dunedin central-city bus loop is still on the cards, but the regional council says it will not be involved.

Late last year the Dunedin City Council asked the Otago Regional Council to investigate the potential of a route with a "small to medium-sized vehicle with low or no emissions" going from near the Otago Museum to Queens Gardens.

A regional council meeting this week decided to advise the city council it would take no further action on the loop.

A report by Ian Wallis Associates said the loop would not benefit the regional council's bus network, and might even be detrimental to it.

Regional council corporate services director Nick Donnelly yesterday said while it would not run the service, the city council was "welcome to pursue it themselves".

The city council would then have to register the bus service with the regional council, he said.

Dunedin city councillor David Benson-Pope said it was "loopy" for the regional council to advise the city council it would not pursue the project, as it was never asked to.

If the city council funded such a service there would be questions around funding as the regional council is the organisation legally tasked with public transport.

Cr Benson-Pope said he was focused on investigating ways to make it happen.

"I'm sure we can find a way to fund it ourselves, aside from the usual transport funding system. It seems to me this is a no-brainer."

Cr Benson-Pope said those figures made the service "even more desirable".

"If it's of that order of cost, why would we charge at all? My preference would clearly be for it to be a free service in the inner city.

"It seems to me it'd be a real plus to have that service, especially a free one. I'm on the case, really."

The regional council was asked to cost it as it had the "knowledge and contacts", he said.

The museum had indicated to him there was a great need for such a service, he said.

The Wallis report said the money used to create the route would be "better used to boost service levels on existing core routes".

It did not service any destinations not reached by other buses on the network, the report said.

The route was proposed to run on George and Princes Sts one way and then mostly on Cumberland or Castle Sts, depending on the direction of the loop.

The route would have a frequency of about 12 minutes.