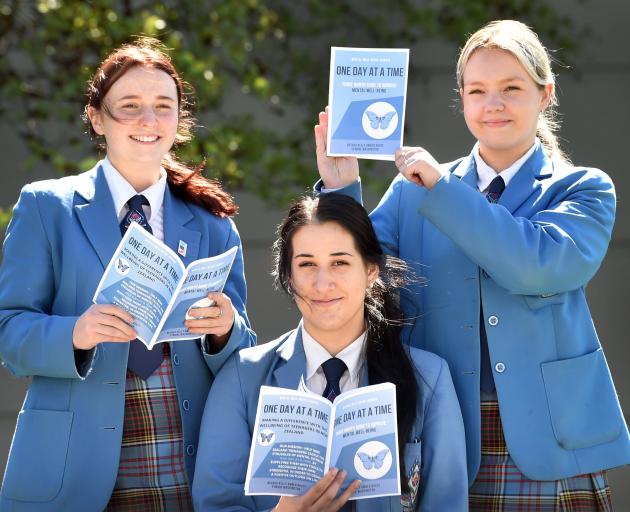 Holding up copies of their recently published mental health guidebook are Queen’s High School pupils (from left) Amber Dovey, Symone Washington and Nushka Kelly in Dunedin yesterday. PHOTO: PETER MCINTOSH
A group of Dunedin teenagers have used their own battles with mental health as the building blocks for a resource they hope will help their peers.

The One Day at a Time mental wellbeing journal began as a business assignment by Queen’s High School pupils Nushka Kelly, Amber Dovey and Symone Washington (all 18).

After eight months’ work, the 107-page colour publication is being sold to teens around Dunedin.

All the techniques and tools were based on what she and Symone were taught by mental health professionals while their own mental illnesses were being treated.

The trio had struggled with a variety of mental health issues, such as anxiety and depression, and wished they had a resource to guide them through their recovery.

"We just want to help New Zealand teenagers to take it one day at a time," Nushka said.

They had run the publication by several specialists to ensure their work was accurate and contained proven methods.

Almost every page had a unique design and it took a lot of time to add "every little detail one by one", she said.

They named their business Papillon Bleu, which means blue butterfly in French.

The blue butterfly was often used as a symbol of mental health, Nushka said.

The group had big dreams for future publications but were still "trying to scrape through all the hard stuff" such as financing further prints of One Day at a Time and getting organisations on board.

They had already put in more than 100 hours’ work and more was still to be done.

Two runs of 25 copies had been printed so far and they had only a handful of copies left to sell, she said.

Five percent of each sale is being donated to the Mental Health Foundation.