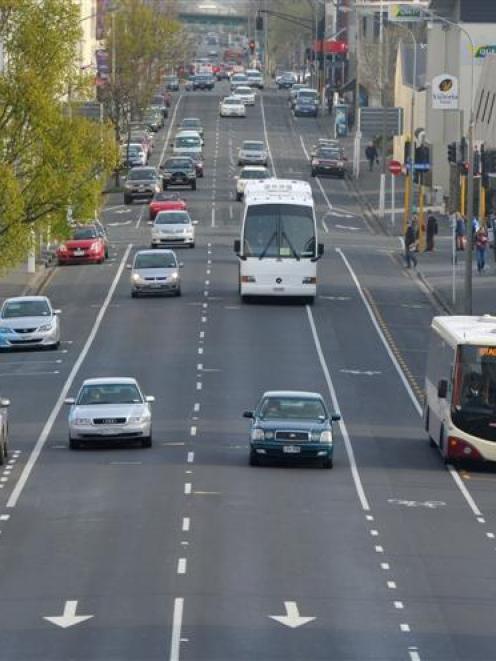 Proposed cycle lanes would result in car parks being removed from Dunedin's central one-way system.
Between 200 and 400 parks on the central Dunedin one-way system will be removed and replaced by dedicated cycle lanes if a new plan by the New Zealand Transport Agency goes ahead.

The agency, in conjunction with Dunedin City Council staff and cycle advocacy group Spokes, has come up with two preferred long-term options for improving safety on Dunedin's one-way system, both of which include cycleways separated from the road.

The first option would result in cycleways beside existing footpaths along the right-hand side of the two one-way sections of State Highway 1, where there is now on-street parking.

A report to be considered by city councillors at Monday's final meeting of the triennium said this was considered the option that would most improve cyclist safety.

The cycleways would be separated from traffic by a kerbed island or planter boxes, and would run along both one-way streets between Rattray St and the Dunedin Botanic Garden.

The second option would be a two-way cycleway along Cumberland St.

The report, prepared by council staff to update councillors on cyclist safety improvements on the two stretches of road, said five long-term options had been identified for improving safety on the roads.

There had been 13 crashes that caused serious injury to cyclists as well as three cyclist deaths on the one-way system since 2003.

Since then, cycling infrastructure had been steadily improved, but further serious and fatal injuries had shown the need for a complete reconsideration of how cycle travel and safety was managed in the central city, the report said.

After the death of a cyclist on the section of road in November 2011, the council held an extraordinary meeting at which it was decided to ask the NZTA to urgently look at options for improving safety on the highway.

Since then, short-term safety improvements identified in conjunction with the council, such as moving some parks, installing bollards and widening existing cycle lanes, have been made.

NZTA projects team manager Simon Underwood said in developing the options the working group recognised that for north-south travel through the inner city there were few alternative off-road or non-arterial route options for cyclists.

As an example, the other continuous route of George St and Princes St was also busy and included bus traffic.

The group came up with the five options for long-term safety improvements. A sixth was added after councillors requested in May that converting the eastern footpath of the northbound one-way section to a cycle lane also be investigated.

The NZTA narrowed the options down to the two preferred options based on the best outcomes for safety, level of service for cyclists and vehicles, effect on parking, and cost, Mr Underwood said.

The footpath conversion option was the least-preferred option because of the safety issues it presented.

The purpose of the consultation was first to find out if people wanted these options, and then to determine which people preferred.

Council transportation planning manager Sarah Connolly said the council and the NZTA believed improving cyclist safety on the one-way system was the key to a safer inner-city network for cycling.

The council is being asked to note that initial consultation would start shortly on the two options, she said.

Preliminary and informal conversations would then be held, with a formal consultation process to follow.

The consultation process would be designed to ensure affected businesses were involved.

Mr Underwood said the extent to which parking would be affected depended on the preferred option for cycle provision.

If the two-way cycle lane was preferred, about 200 parks would be affected.

Mr Underwood said the impact on parking would be managed by reviewing parking provision on the left-hand side of the streets and in surrounding areas to ensure there were adequate spaces.

Shorter time limits on side streets would be introduced, where spaces were now mostly used by commuters. Parking buildings and off-street car parks were not used to capacity at the moment, and it was also anticipated that growth in cycling would decrease parking demand.

The detail of the design of any cycleway depended on the option chosen, he said.

''At this stage, this is about determining what is wanted. We know there are an awful lot of questions to be answered.''