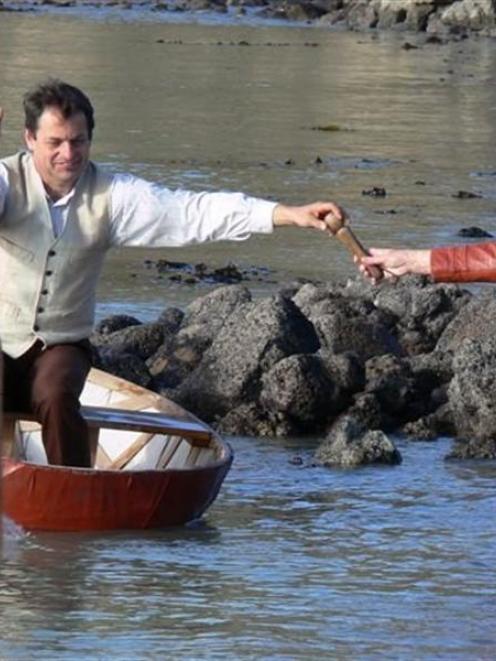 The baton is being transported by environmental groups along the length of the country, using transport with minimal carbon emissions, including yacht, cycle and public transport.

The baton arrived in Oamaru on Sunday afternoon with Environment Canterbury councillor Rik Tindall in a hybrid car and was later taken for a ride on the train to the blue penguin colony.

Yesterday, the baton was taken for a paddle in Oamaru Harbour by coracle enthusiast John Baster.

It must be in Palmerston by 11am tomorrow to meet the Seasider, and organiser Helen Stead was still looking for people to carry the baton from Oamaru. She already had offers from a horse-rider and a cyclist but still needed people for certain legs of the journey.

When the baton arrives in Dunedin by train later in the day, it will be welcomed by a bagpiper and Dunedin Mayor Peter Chin.

Although she had previously ridden the 160km trail three times, next week's journey would be the first time she had ridden the trail over three days.

She would take a train to Middlemarch on Sunday, and anticipated her first day's ride from there - about 60km to Ranfurly - would be ‘‘quite a big day on the bike''.

Otago event spokeswoman Dr Nancy Higgins, of Warrington, said the relay was co-ordinated by regional groups throughout the country dedicated to raising awareness of the effect of carbon emissions.

The groups ranged from political organisations such as the Green Party to regional environmental activists, she said.