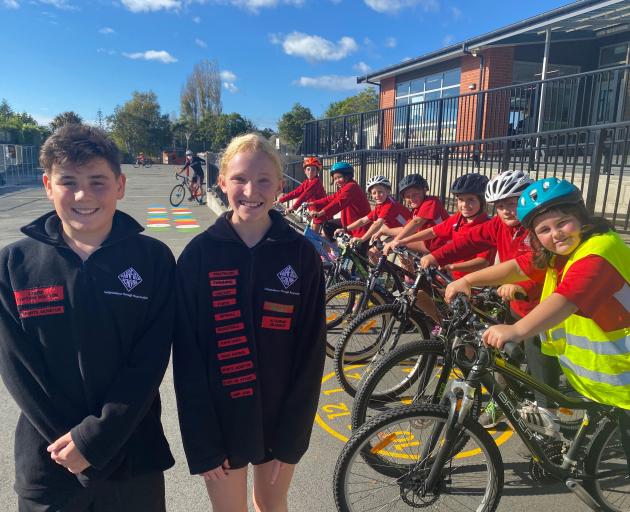 The young people of the Saddle Hill area had a chance to shine at last week’s online Saddle Hill Community Board meeting.

Starting with the public forum, the board heard a presentation from Fairfield School year 8 pupils Felix Newell and Eve Kelleher in support of a $3000 funding application towards the installation of a bike track and pump track at the school.

Sharing a map of the proposed $100,000 bike track with the board, Felix and Eve extolled the virtues of such a facility for the whole Fairfield community in terms of health and wellbeing, activity and road safety education.

The school track could be a place where Dunedin people took their children to learn to ride, Felix said.

So far, the project had engaged with Bikes in Schools on the map design, and a parents’ committee had been working on raising funds, Eve said.

To date, the project had raised $22,560 towards the $100,000 goal through raffles, grants, community donations and a mufti day.

It was proposed to start construction on the bike track in December, the pupils said.

Saddle Hill Community Board members were impressed with the presentation, and by the scale of the project.

Later in the meeting, the board discussed the $3000 funding application, noting its admiration for the project, while highlighting some concerns over access to the track for the community.

With the $5000 the board set aside last year for the Delta Dr basketball court no longer required, the board agreed it had enough funds to support the project.

The motion to grant Fairfield School $3000 for the bike track project was approved by majority vote.

Rosie Davison reported on her recent experience on the Spirit of New Zealand.

The board granted Rosie $500 towards the trip in November 2021, as part of its Youth Ambassador Scheme.

Accompanying her verbal report with a PowerPoint presentation and photos, Rosie described the practical and leadership skills she had developed during her time on the training ship.

"I became much more confident with leading groups and making decisions," she said.

"It was such a good time. I learnt a lot and met lots of good people."

Board members congratulated Rosie on her presentation, saying it was good to have "amazing young people" such as herself in the Saddle Hill community.

Interest was high among board members as they heard a presentation from Housing Action Plan adviser Gill Brown.

Highlighting the close working relationship between Kainga Ora (Housing NZ) and the Dunedin City Council around the vexed issue of housing, Ms Brown described the work she had done since July 2021, to gather information from all sectors of the community and formulate a plan.

Board member Keith McFadyen spoke about housing issues in the Brighton area since the closure of the camping ground, and the need to ensure the area was in the mix when it came to new social housing.

He agreed to be the board’s liaison with the Housing Action Plan as required.