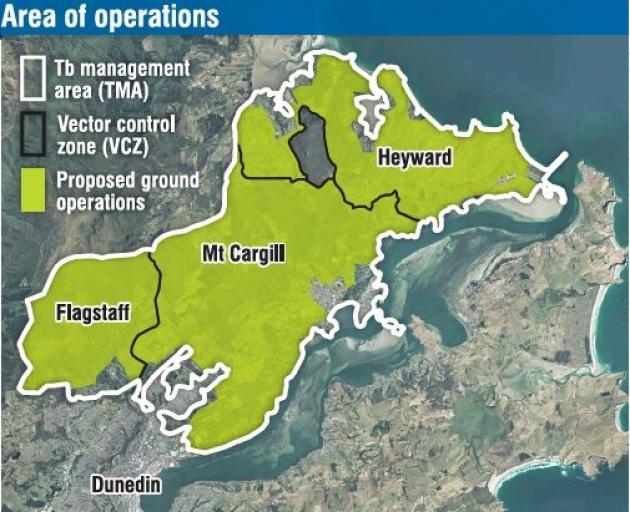 A pest-culling operation on 12,500ha north of Dunedin is aimed at decimating the possum population by poisoning and trapping.

Ospri has sent pamphlets to residents in the area informing them of the next stages of its work over the next two years.

It covers an area north of the city separated into Flagstaff, Mt Cargill and Heyward catchments.

This includes some residential areas such as Ravensbourne and St Leonards, but avoids Port Chalmers, Aramoana and Waitati.

Ospri is a non-profit company which runs TBfree NZ Ltd, the statutory management agency for the eradication of bovine tuberculosis.

The methods for the Mt Cargill and Heyward areas had not been decided yet.

The company would work with the Dunedin City Council and large-scale landowners who would have to agree on the method for any particular area.

While 1080 was used in a past project in Silver Peaks, the coming operation would not involve the poison because of urban density.

The toxins used depended on the size and terrain of the area and were either placed in bait stations, stapled to trees in biodegradable bags, or hand laid.

"The contractors go around and assess where they can go."

"They may go all the way to the boundaries of some residences, but the method will depend on the size of the land," Mr Chagnon said.

While it had not been finalised, contractors planned to start the next stage next month or September.

Its goal was to stop bovine tuberculosis, which is present in the possum populations in the area, from returning to herds.

The aim was to reduce possums to a level where the disease could not be spread.

After the two-year operation, Halo Project will try to keep possum numbers down as part of the Predator Free 2050 Dunedin goal.

"They are doing the initial knock-down work. We see that as such a great opportunity in time and money in achieving the biodiversity gains."