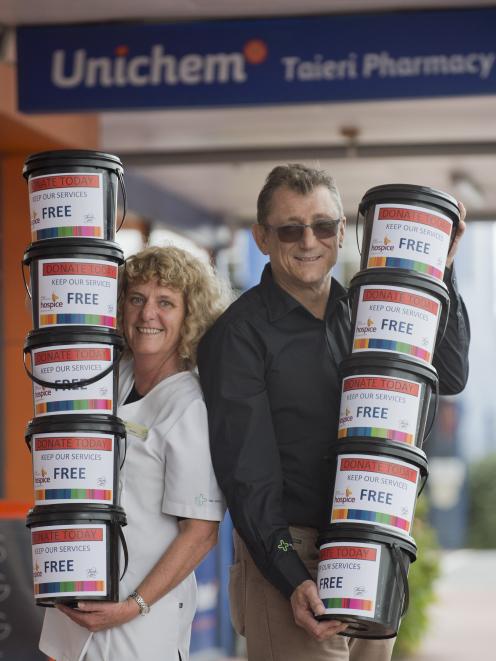 The Unichem Knox Pharmacy owners’ road trip was part of a last-minute effort to ensure Otago Community Hospice, which was forced to cancel its annual street appeal, did not miss out on thousands of dollars in critical donations.

Mrs Wild said Dunedin Pharmacy Guild members wanted to help when they saw the appeal, which would have been held today, had to be cancelled due to Covid-19 Alert Level 2 restrictions this week.

She began calling every pharmacy in Dunedin and asking if they would allow a hospice donation box at their counter and promote it.

Mrs Wild finished making the calls yesterday morning, and all of the pharmacies had agreed.

"We will be doing as much as we can," she said.

Knowing hospice staff would be tied up working on other fundraising efforts, Mr Wild volunteered to drop off all of the donation boxes.

It meant he travelled everywhere from Port Chalmers to Mosgiel yesterday, and Mrs Wild eventually had to jump in a car and help out too.

Hospice development and engagement manager Becs Wilson said they were "overwhelmed" by the support.

It had taken months and co-ordinating about 500 volunteers to organise the street appeal, which usually brought in between $35,000 and $40,000.

It was cancelled as it was impossible for volunteers holding the buckets and those putting in donations to socially distance, she said.

"We had to untangle all the volunteers and take the hit with the loss of fundraising money.

"It was pretty disappointing."

However, the call from Mrs Wild turned that around.

"It is amazing how our community gets together," Ms Wilson said.

"When things go awry like this the community really does dig in for us — it is incredible."

The pharmacies will have the hospice donation boxes in store for the next week.