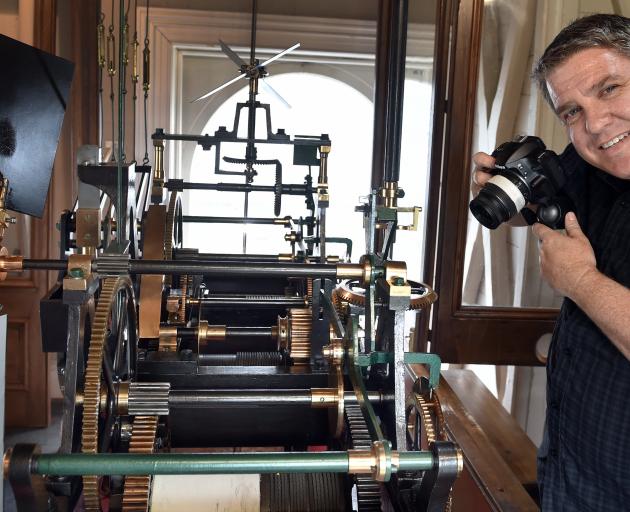 Calvin Blyde, of Tauranga, prepares to take digital images inside the Dunedin Municipal Chambers clock, which is usually off-limits to the public. PHOTO: PETER MCINTOSH
The Dunedin Town Hall clock fell uncharacteristically quiet on Saturday as digital photography took place behind the scenes in the clock tower.

Dunedin City Council digital archivist Alison Breese said the Municipal Chambers clock tower was "one of Dunedin’s most recognisable icons, but few have been able to venture inside".

"However, that’s about to change," Mrs Breese added.

The interior of the clock tower, built in 1880, was off-limits to the public but with the help of modern technology, people could soon take a virtual tour of the interior.

The 139-year-old building was probably one of the most photographed buildings in the city "but people only get to see the outside".

"The interior is also impressive. We’re using technology to create a digital record and make it accessible through a virtual reality tour of the interior and the clock’s workings."

Photogrammetry is the science of making measurements from photographs.

Although the town hall clock continued to tell the correct time, the clock’s chiming mechanism was disabled on Saturday to enable the digital photography to be completed without the challenge of large moving parts.

Mrs Breese said planning for the project had begun 18 months ago and she was "very pleased"with the progress made, thanks to the help of Dunedin City Council departments.

It was expected the 3-D model would be ready for viewing early next year.

Although it had some modern additions, the clock itself was original, still working 139 years after then mayor H.J. Walter released the pendulum to set it going at noon on December 2, 1880.