By John Gibb
0 Comments
Have some coffee and see what develops.

Plenty of cafe-goers have tried this idea over the years, but this week Dunedin photographer and musician Chris Schmelz is giving the usual formula a twist.

He is welcoming all regular customers and other curious visitors to take part in an unusual photographic project, called Caffenol Cafe 1, at RdC Cafe in George St each day, between about 9am and 2pm.

Caffenol Cafe is an analogue photography project using coffee to develop film in a cafe.

Mr Schmelz, who is a former part-time employee at the RdC Cafe, said he invited visitors to the cafe to have their portrait photograph taken by him.

He then used his own version of a traditional chemical processing of film negatives on site, using "Caffenol", a special formula that included the cafe’s own coffee blend. 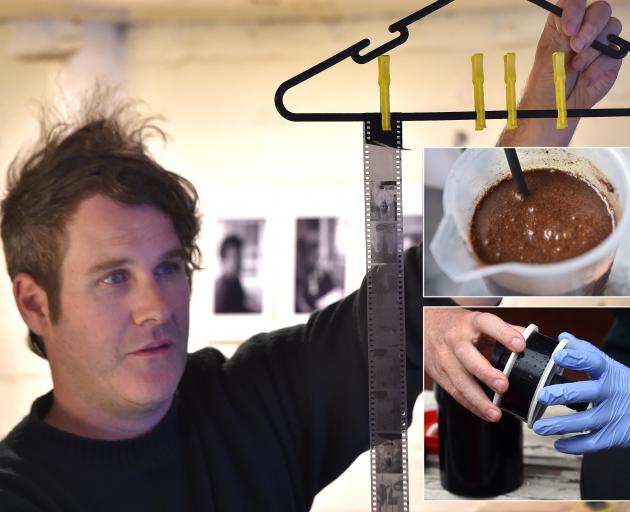 Dunedin photographer Chris Schmelz works his magic and new 35mm photographic art percolates into view during an offbeat coffee-linked art project at a Dunedin cafe yesterday. Photo: Peter McIntosh.
Creating such art was "fun" and the use of modified coffee remnants not only involved recycling but also was cheaper than traditional chemicals used in wet processing of negatives.

People could watch him developing the film while they sipped their coffee.

Portraits would then be digitally printed and available to take away or remain in the cafe for an exhibition.

This project is one of several supported by the Dunedin Dream Brokerage’s ‘‘Off the Ground’’ initiative and featuring in the city this month.

The funding is sourced through a Dunedin City Council Covid-19 response grant.