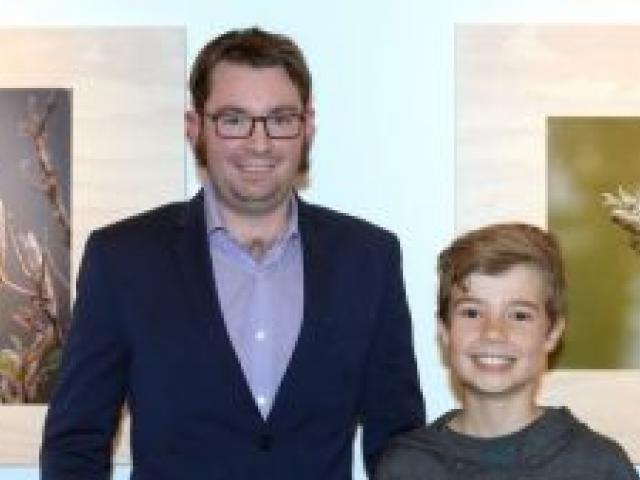 Dunedin amateur photographers Riley Baker (left) and Jack Aubin, with their winning entries in the Otago Wildlife Photography competition at the Otago Museum last night. Photo by Linda Robertson.
A Dunedinboy's reputation as one of the region's best photographers continues to gain momentum after he won two prizes in the annual Otago Wildlife Photography competition.

Fresh from making the final of the 10-and-under category at the London Natural History Museum wildlife photographer of the year competition in May, Jack Aubin (9) won both the 14-and-under prize and the jury prize at an awards ceremony at the Otago Museum last night.

The jury prize was open to all 1997 entries and was judged as going over and above what was required for the other catagories.

His other winning photo was titled Little Brown Tree Frog Out On A Limb.

"I was just really surprised I got this far,'' Jack, a pupil at Northeast Valley Normal School, said.

The family was kayaking in the white heron sanctuary near Okarito when Jack took the photo.

"Mum held me while I got the shot.

"It was the best place to get the shot,'' he said.

The overall winner of the competition was Riley Baker, also of Dunedin.

"I was thinking maybe a highly commended but definitely not first place,'' Mr Baker said.

Photography, and especially wildlife photography, was a hobby and Mr Baker enjoyed the seclusion while taking photos.

"It's [wildlife photography] probably what I enjoy the most,'' he said.

Otago Museum director Dr Ian Griffin said the 120 entries on display at the museum last night were "astounding'' and the judges noted it was the best quality they had seen in 17 years of the competition.

Catagories this year included animal, plant, human impact on the environment and wildlife in action (video).

The exhibition opens at the museum today and will run until October 16.

Submissions for the people's choice award will be announced near its conclusion.