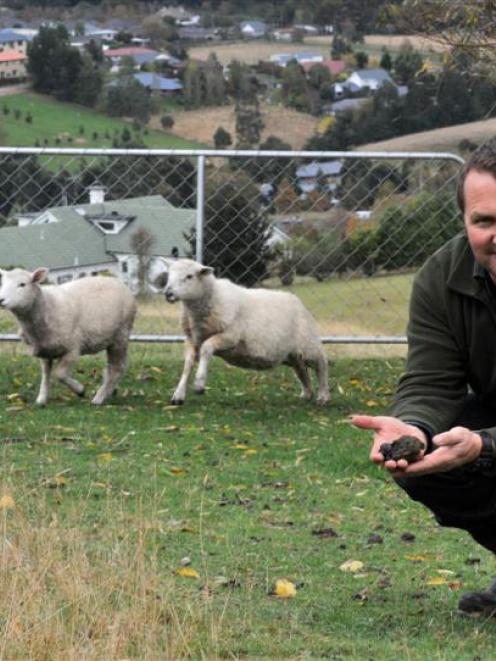 Kinmont property owner Chris Adams will be obliged to clean up after his sheep if the Dunedin City Council endorses new rules for owners of residential and rural residential holdings. Photo by Gerard O'Brien.
Lamb Chop could soon be followed around the paddock by an owner with a pooper-scooper.

The Dunedin City Council is considering rules which would force some property owners to collect the little black offerings left behind by animals, including sheep, pigs and goats.

The rules would not apply to commercial or lifestyle farms, but would cover all residential and rural residential properties in Dunedin with smaller numbers of sheep and other animals.

The rules, still in draft form, are already causing a stink.

He runs four sheep on a 1.6ha block of residential-zoned land at Kinmont, near Mosgiel, "just to keep my freezer full".

"It's just crazy. I can't believe with all the problems of the world we are worrying about this."

His concerns were mirrored by Middlemarch Community Board chairman Barry Williams, who said the proposal was "ridiculous".

Mr Williams owns several properties in Middlemarch, including one rural residential section with 100 ewes on it, and said he had "no intention" of picking up after them.

"You would have to put a bucket under all the sheep. It's unbelievable.

The rules are in the council's draft Keeping of Animals (Excluding Dogs) and Poultry Bylaw 2010, under consideration by a council working party and community groups ahead of wider public consultation.

The bylaw aimed to protect the public from noise, nuisance and health and safety threats caused by animals.

Among the suggestions is a rule requiring owners to collect animal droppings.

The material should either be stored in a fly-proof container and disposed of, or buried under at least 50mm of soil.

The rules aimed to protect neighbours from nuisance, odour or a threat to health and safety.

"These things are always good to put out first, before we adopt them, to see how practical they are."

There were empty rural residential sections in Middlemarch - as elsewhere - that required grazing by sheep to keep grass down, and the concerns raised were "very valid", she said.

However, neighbours living near problem properties would also have views, and it was important to consider both sides, she said.

The bylaw covered most animals on residential and rural residential properties, but was likely to be used only when a neighbour complained, she said.

Mr Williams said he would "definitely" be making a submission on the council's draft bylaw.

"A lot of that stuff you read and laugh and think it will never happen, but if you don't do something ... it can get through."