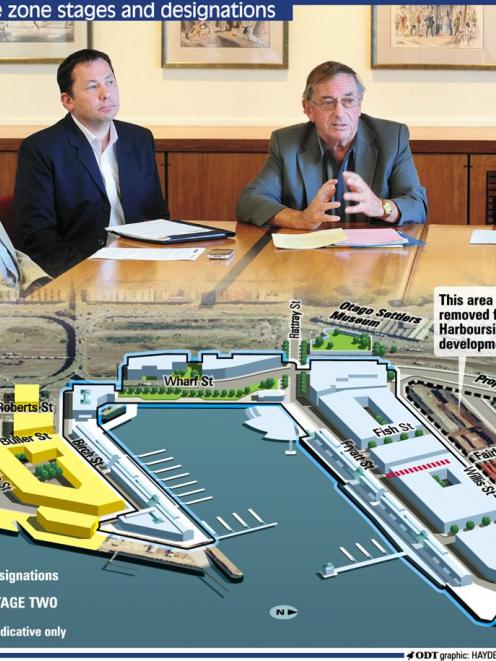 Chamber of Commerce president Mark Willis, chamber chief executive John Christie, Dunedin city councillor Colin Weatherall and council chief executive Jim Harland discuss the Harbourside proposals.
The Dunedin City Council appears to have staved off what could have been a bitter Environment Court battle with the city's business community, after a joint announcement yesterday that an agreement on the harbourside development had been signed.

For its part, the council has agreed to dump much of stage two from its harbourside plan, meaning a reduction to its "50-year vision" for the area.

Businesses have agreed to accept stage one, subject to further negotiation.

For businesses, the change is a significant concession, but with some located inside or close to the area affected by stage one, clearly more negotiation is to come before the matter is fully resolved.

The decision to drop part of the development is believed to have been reached at a recent council meeting in Middlemarch, and the Otago Daily Times understands no councillors voted against it.

A district plan change allowing the harbourside to be redeveloped with apartments, bars and cafes was approved early last year, after a nine-day hearing in 2008.

The decision approved stages one and two of the development, meaning an area defined by the harbour edge and Thomas Burns, Mason, Birch, French and Buller Sts would change from industrial and port zones to a new harbourside zone.

It also confirmed two notices of requirement to designate areas for a walkway in Fairley St, which would cut through buildings in its path.

Under the proposal, developed by the council and Port Otago's property investment subsidiary, Chalmers Properties Ltd, which owns much of the land, the change of zoning would set a platform for developers to invest in the area.

The plan received heavy criticism from industry, with many businesses saying the proposal could seriously compromise their operations.

Heavy industry, heavy traffic and the resulting noise, they said, could not go hand-in-hand with cafes, bars and housing.

The businesses, headed by the Otago Chamber of Commerce, took the issue to the Environment Court, and a pre-hearing was scheduled for next Friday.

That hearing will still go ahead, but Cr Colin Weatherall, who headed the negotiations, said he would be reporting the changes the council had adopted, which he believed gave a "strong plank" to argue for more time to resolve the situation.

Yesterday, Cr Weatherall said the council had resolved to withdraw parts of stage two "partly in response to concerns raised by appellants concerned about effects on local business".

It would retain the part of stage two south of the Steamer Basin, and designations for the walkway.

The council would continue to mediate with affected businesses to "confirm objectives, policies and rules" for the rest of the harbourside zoning.

While businesses affected by stage one still had issues to deal with, the council was willing to discuss any problems face to face.

The area dropped from the plan was "a significant piece of land" and gave the affected businesses the confidence to keep investing.

Mr Christie gave much of the credit for the breakthrough to Cr Weatherall, as did Crawford Glass owner Graeme Clarke.

His Fryatt St business was in the middle of land affected by stage one, and he said the issue had got to the point "where we can all talk about what's going on".

"For once, we've had the council listening to us," Mr Clarke said.

Council chief executive Jim Harland said the council had listened to appellants, and changed the plan. The "vision" for the harbourside was still intact.

"Stage one, as a whole, will go ahead first."

Cr Weatherall said there was "a little bit of give and take" for the situation to be tolerable to both.

• DCC has signed an agreement with Otago Chamber of Commerce and businesses affected by harbourside development to avert Environment Court battle.

• Council has agreed to drop stage two of the development, reducing its size.

• Chamber and businesses have agreed to stage one, subject to continued negotiation.

• Parties will now negotiate, before taking resolved issues to Environment Court for approval.