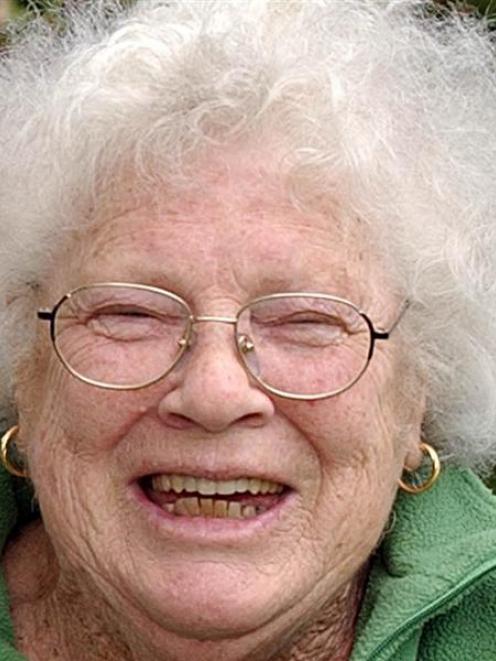 Janet Frame in 2003. Photo by Fairfax.
Denis Harold believes Patrick Evans' play Gifted is a travesty in its misrepresentation of Janet Frame.

Patrick Evans' play Gifted, that opened at the Fortune Theatre on Saturday, suffers from a significant ethical problem.

Though the play is fiction, with all the dialogue and most of the events having never happened in reality, the three characters are given the names of real historical people.

The result of Prof Evans' deliberate distortion in his play of the facts of these peoples' lives is, in my opinion, a travesty, especially given that Janet Frame died less than 10 years ago.

The artistic director of the Fortune Theatre, Lara Macgregor, claims that in Prof Evans' play, ''There's nothing but beauty and poetry and a huge love, an amazing use of language''(ODT, 5.9.13).

She goes on to state that, ''What's imagined and what's not is so blurred and melded together''.

Conrad Newport, the play's director, reinforces her admission that Gifted is not factual by stating that, ''The truth is bent for dramatic purposes''.

If, therefore, the play is not true, why had the actors, according to Ms Macgregor, ''studied videos of their characters to be more truthful in their portrayals''?

Ms Macgregor and Mr Newport are sending a mixed message.

Janet Frame was a well-known New Zealand author and winner of the country's most prestigious literary prize when she went to stay at the property of Frank Sargeson, who knew of her incarceration in mental hospitals, an experience that she made no attempt to hide from him or anyone else.

Prof Evans deliberately changes these facts: the character he gives the name ''Janet Frame'' has no reputation as a writer, and the character given the name ''Frank Sargeson'' does not know of her past history.

Many other facts about Frame's life and character are similarly falsified.

This is untrue, and an insult to a woman who was self-directed, ambitious and honest.

After attending performances of the play recently in Christchurch and New Plymouth, some theatre goers and reviewers have claimed, though admitting they knew little of Sargeson and Frame, that they found the play ''convincing''.

But what convinced them was a self-contained spectacle.

The Fortune Theatre has created an advertising campaign that presents a fragmented image of a young woman, girlish in short white socks and with her legs slightly apart, posed in front of a hedge that has a partially oval opening in it.

This depersonalised and sexualised imagery is disquieting, and a clue to Prof Evans' attitude to Frame that is apparent in other of his writings.

The real Janet Frame was aged 31 at the time in which this play is set, intellectually mature and courageous, having triumphed over almost five years of institutional misdiagnosis and abuse - not a girl.

Next to the Fortune Theatre's promotional image for the play are words in quotation marks: ''Don't try to change me - I won't be changed'', followed by the name ''Janet Frame''.

This is a fake quote: Frame never said these words.

Prof Evans, who claims some expertise on Frame's work and life, would know this. This quote should be followed by the name ''Patrick Evans''.

The theatre's website links to recent interviews with Prof Evans and reviews of the play, but does not link to the interview on the Radio NZ Concert programme Upbeat on August 19 (available online), in which Eva Radich talked at length to Prof Evans about his play.

In reply to her question (15 minutes into the interview) about how he interpreted Frame, Prof Evans replied, ''Well, ahh, we have in our family a much loved autistic person ...''

Evans: ''Ahh, everybody I know who is autistic is autistic and not autistic. You deal with the person in front of you.''

Radich: ''Janet was misdiagnosed with schizophrenia - that was certainly never an issue.''

Radich: ''And the label we have now is autism?''

Evans: ''It is, yes. And you take the person in front of you and you can see the vulnerability, the difference, the extraordinary insights that people have who are different in that way.''

These are astonishing statements by Prof Evans, a revelation that he considered Frame had been schizophrenic, which is a label he now believes has been replaced by ''autistic''.

This is the first time in 40 years, as far as I am aware, that he has put statements like this on the record.

Under the cloak of ''nothing but beauty and poetry and a huge love'' audiences are being fed a ''mad genius'' myth that has been debunked.

There have long been indications that Prof Evans did not accept that Frame had been wrongly diagnosed with a mental disorder, despite a panel of world-renowned psychiatrists in London in 1957 concluding that she had been misdiagnosed.

Prof Evans has often purveyed a catchphrase, ''the myth of the misdiagnosis'' in an attempt to undermine the fact of Frame's misdiagnosis.

Prof Evans' admission explains why he needed to drastically change the facts of Frame's life and character in Gifted: the facts do not fit his fiction.

• Denis Howard, of Dunedin, is a trustee of the Janet Frame Literary Trust.