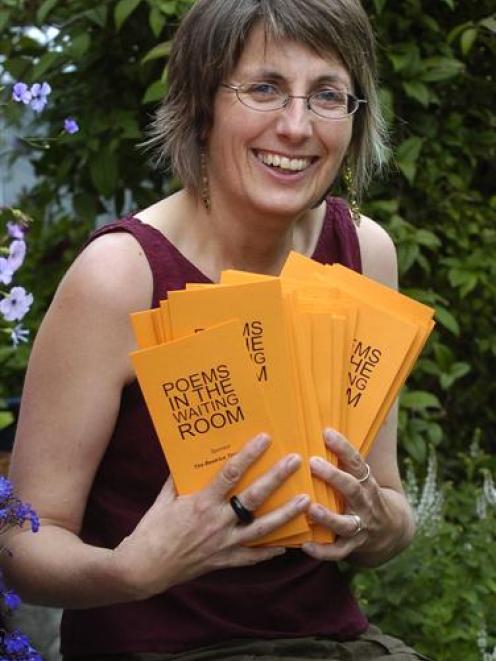 Dunedin poet Ruth Arnison with some of the poetry cards she is preparing to deliver to waiting rooms around Dunedin next month. Photo by Peter McIntosh.
Patients reading poetry cards in Dunedin doctors' waiting rooms may be surprised to find they are sponsored from the United Kingdom.

It's a situation poet Ruth Arnison, who is editing the Otago Poems in the Waiting Room cards, would like to change.

So far, however, her approaches to about 15 mostly Otago businesses have drawn almost no response.

The only organisation which has even acknowledged her correspondence is the Pharmacy Guild of New Zealand and it was not in a position to help.

She is seeking money to pay only for the ongoing printing of the A-4 three-fold cards which will be distributed free to waiting rooms four times a year.

She is happy to give many hours of her time selecting the poems, chasing poets and their publishers for permission to use their works, and delivering the finished product - "it's such a passion for me".

In the course of this she has discovered the works of poets previously unknown to her and has been buoyed by the support and enthusiasm of fellow poets.

Only one poet asked for payment and she had to explain that she could not afford that.

Twenty-five doctors surgeries in Dunedin and Balclutha, have been willing to stock the free cards which patients are able to take home with them.

Mrs Arnison is keen to place the cards in Otago District Health Board hospital waiting rooms, but the idea has not been well received by hospital management to date.

The $1000 she has been given to establish the project comes from the Beatrice Trust, a charitable trust connected with the founder of the 10-year-old United Kingdom Poems in the Waiting Room, Michael Lee.

The purpose of the cards is both to promote poetry and give patients an interesting alternative to magazines in the waiting room.

A different card is produced for each season.

The summer card was delivered in November, and the autumn one will go out to surgeries at the end of next month Mrs Arnison, who was given permission by Mr Lee to use the Poems in the Waiting Room name, chooses a mix of New Zealand and overseas authors for the cards.

The guidelines from the United Kingdom organisation asked that she not choose anything political, religious or too gloomy.

The cards are also not a vehicle for deliver-ing social or health messages.

People in waiting rooms might be apprehensive about their visit and the poetry needed to be accessible, calming and a bit "jolly", although they were not all sweet, she said.

She chose some older poems which might be familiar to older people and in her winter selection she will be including poetry with appeal for children.

She has not received much feedback from patients yet, but was thrilled to hear from staff at the Gardens Medical Centre yesterday who said they had only one of their 20 cards left, the project was "brilliant" and they were ready for delivery of the next season's cards.

Mrs Arnison would like to see the project extended to cover other parts of Otago eventually, but that would depend on funding.

She has grant applications before the Dunedin City Council and the Otago Community Trust, but as the project was not a charitable trust there was a limit to the funds it could apply for.

Mrs Arnison said she could supply any prospective sponsors with relevant financial information.

-Since then about 15,000 poetry cards have been distributed.

-Can be found in 750 United Kingdom waiting rooms.

-In the United Kingdom it is regarded as the most widely read regular poetry publication.

-In Otago it began last year, with 500 cards delivered to 25 waiting rooms.