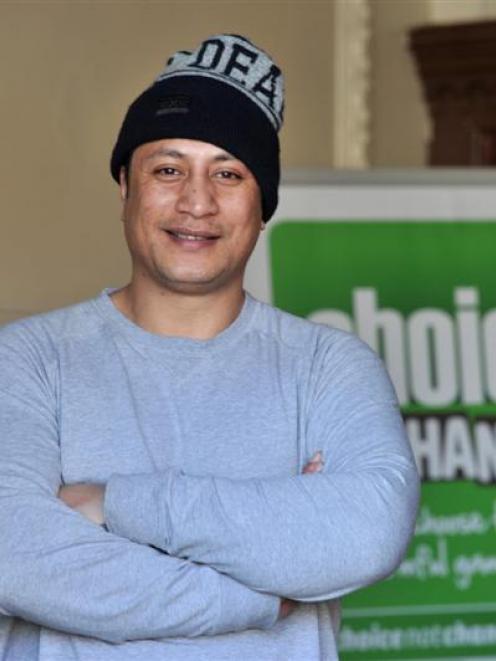 New Zealand hip-hop star Scribe visited Dunedin yesterday to talk to youth about gambling harm, and to watch budding artists perform. Photo by Jane Dawber.
Pokies cost Scribe an estimated $100,000 but it was the loss of his children and partner that made him seek help for his gambling addiction.

The hip-hop artist said he began playing pokies at a local Christchurch pub at the tender age of 14.

"I grew up in a family where gambling was quite normal, and I thought it was normal."

The 33-year-old, who topped the charts with his debut album The Crusader, said his first foray into gambling was playing Housie with his grandmother when he was 7.

"In some communities, it is just such a normal part of life."

Scribe, who was born Malo Luafutu, has not gambled for three years, and still receives counselling for his addiction - "it is kind of like alcohol [addiction] ... It just doesn't go away.

"I know some of my issues were quite deep rooted. I have a quite colourful upbringing in life and have been honest about my life adventures and addictions.

"But I am not scared of the truth, and ... why people connect to me and my music is because they can relate to me."

And his message on gambling for today's youth?

"Kiwis we are going to gamble; it is in our culture. But if there is a problem and you are concerned, then get help early. Don't get to that stage when you are lying to your family, spending all the money and your kids are going out."

Scribe said his lowest point was not losing an estimated $100,000, but when his long-term partner left with his three children, because of him not confronting his gambling problem.

He was in Dunedin on Friday as part of a national tour aimed at highlighting the impact of gambling harm, which also gave budding artists the opportunity to perform in front of the multi-platinum-selling artist.

Those artists included Dunedin duo Grant Kingi and Ajit Arun, finalists in the Scribe With Us competition which attracted hundreds of entries nationwide.

Scribe, who was reunited with his partner with whom he now had a fourth child, said he was enjoying visiting the South Island, after moving to Porirua following the February 2011 earthquake in Christchurch.

The Mayfair Theatre event was organised by the Dunedin Youth Gambling Coalition, and "we want to do something bigger and better next year", spokesman Chris Watkins said.

Visit to highlight impact of gambling