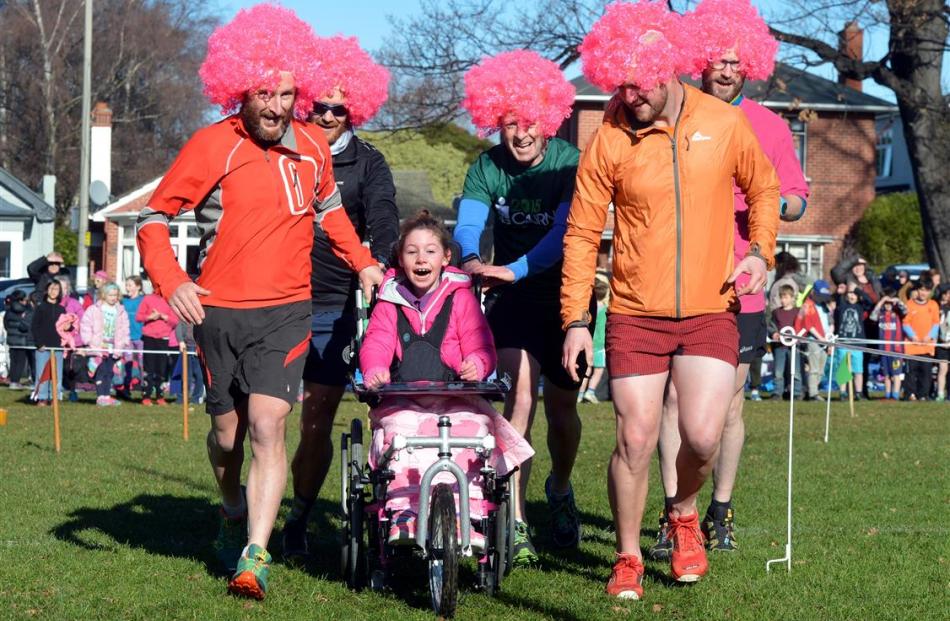 The smile on Poppy McConville's face said it all.

It wasn't because the 9-year-old finished 11th in her age-group at the George Street Normal School cross-country yesterday. It was because she competed alongside her fellow pupils in the annual race.

Poppy has severe cerebral palsy and has been in a wheelchair most of her life.

Participating in sporting activities is difficult for her, unless she has a lot of help.

Mr Paton said some of the team had children at the school, and saw a group of the teachers push Poppy around the cross-country last year.

This year, they thought it would be a great idea to take over.

He said the group consisted of ironman athletes, endurance runners and marathon runners, and while the run was mainly about giving Poppy the ride of her life, it was also a good training opportunity for the Great Naseby Water Race, which they will compete in together later this month.

For Poppy's mother, Cherie McConville, it was a day to remember.

"She's an adrenaline junkie. She loves the speed and the wind in her face.

"This means everything to Poppy. Just to be normal and be doing things alongside the other kids. That's all she wants.

"She just wants to be a normal wee girl, and these fellows today allowed her to do that.

"To see the delight and joy on her face was just magic, and hearing her squeal with delight as she was coming past the crowd - just amazing.''

Mrs McConville said she and some of the teachers at the school pushed Poppy around the race trail last year, but this year she was grateful to be able to stand on the sideline and see her daughter's face as she sped around the circuit.

"Those guys gave us a great gift today, not only for Poppy but for us as parents.''