An unusually high density of possums has been found on Mt Cargill, not far from the Orokonui Ecosanctuary. 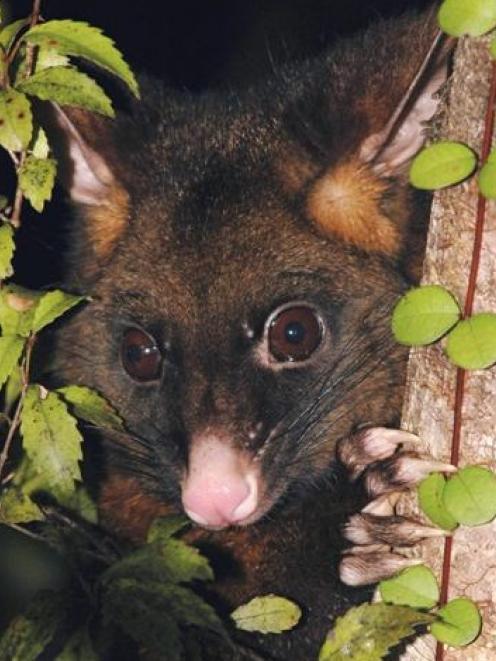 Possums are vectors for the spread of bovine Tb.

Ospri, a not-for-profit company that operates New Zealand's national Tb-free programme, stated in April that 1364 possums had been recovered after an initial possum survey programme, completed in February.

Six possums were later found to have an Otago strain of Tb, and one ferret also had Tb.

Possums are vectors for the spread of bovine Tb.

Efforts to reduce possum and predator numbers in the area beyond the ecosanctuary were discussed in Dunedin yesterday during submissions to the Otago Regional Council's 2016-17 draft annual plan.

Members of an ORC panel considering the earlier submissions heard that an unusually high density of possums had been found on Mt Cargill, but vigorous moves were being made to cut the numbers.

Mr Woodhead supported the LCT's aims, and said because of good co-ordination with Ospri, there was a "wonderful opportunity'' to improve the environment beyond the ecosanctuary.

LCT could advance its plans and to "leverage or springboard off'' the Ospri activities, he said after the meeting.

The panel stated its general support for the LCT's plans, and will recommend to the wider council that support be provided through the council's environmental enhancement fund.

Mr Woodhead later explained that cutting possum and predator numbers would reduce damage to the bush and there would be more hope that native birds that left the ecosanctuary could establish themselves in nearby areas.

On Tuesday, LCT project manager Rhys Millar outlined to the ORC panel the environmental group's plans to promote a wider Beyond Orokonui project, which includes The Halo Project.

The latter project is initially focused in reducing pests in an "inner halo'' area, of about 3500ha, within two kilometres of the ecosanctuary.

A wider "halo'' area would eventually cover a much larger area, including Mt Cargill.

Led by the LCT, the Halo Project is a community-run land management programme supported by the Otago Natural History Trust, which administers the ecosanctuary, and several other organisations.

Mr Millar said it was an "irony'' that a large number of possums had been found not far from the ecosanctuary, but in this case there was "a silver lining'', because of plans for co-ordinated possum control.

Ospri southern South Island programme manager Brent Rohloff said Ospri would continue work to control possums on Mt Cargill in July-August, and beyond that, and was liaising closely with the LCT.