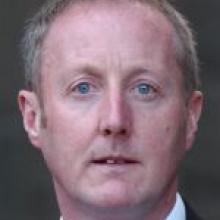 Kevin Thompson
Dunedin City Council staff say lessons could be learned in Dunedin from the investigation into the collapse of Stadium Southland.

Council development services manager Kevin Thompson said the collapse had not prompted checks of Dunedin's box-shaped buildings, such as the Edgar Centre or Dunedin Ice Stadium.

Nor was there an expectation the collapse would lead to any immediate change to building codes, with any moves to do so requiring legislative changes in Wellington, he said.

However, council staff would scrutinise the findings of the review already under way in Invercargill, and look to adopt any changes deemed necessary, he said.

It was too soon to say what those could be, as it was not yet known whether the exact cause of the collapse related to a one-off engineering fault, a problem with building codes or some other cause, he said.

"They [Invercargill authorities] would need to finish their review of what actually happened, and why it's happened, before any conclusions could be drawn.

"We will be looking at the lessons they've learned and any change they would make, and we would incorporate it, or look seriously at incorporating it, in our own policy."

The same was true of lessons learned from earthquake damage in Christchurch, which could lead to changes adopted around New Zealand, he said.

However, Dunedin's buildings were - like those in Invercargill - subjected to peer reviews of designs "right at the start", Mr Thompson said.

"The engineers look at it and make their assessments and then they're peer reviewed. That's just standard practice.

"That's the best you can do - having the experts look at it."

"I say that because they've had snow on them before and they're still standing. They have already been tested."

The only way to check such buildings would be to launch a complete review of each structure, but he was confident each had been "built to the codes that were relevant at the time".

"The only way we would go back and look at them is if we had some concerns about them, and we certainly don't.

"Anything's going to fall over if you put enough load on it - that applies to every building in the city, not just those larger buildings."

Insurance Council of New Zealand chief executive Chris Ryan said he expected the Canterbury earthquake "would push premiums up over the next couple of years", but doubted Southland's snow storm would add to the upward pressure.