Pounamu taken from sculpture at hospital 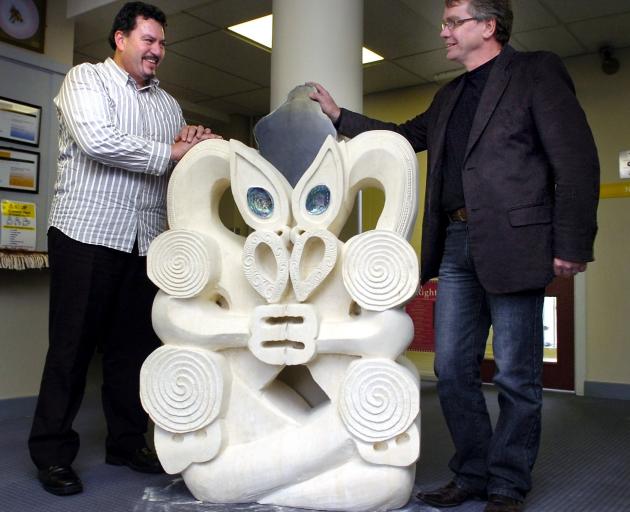 Consumer adviser to mental health services Graham Roper (right) and carver John Kena stand with the Oamaru stone carving topped with the — now stolen — pounamu at the opening of the Hope Garden at Helensburgh House, Wakari Hospital, in 2009. PHOTO: ODT FILES
A large piece of pounamu, or greenstone, was stolen from the top of an Oamaru stone carving at Wakari Hospital over the weekend.

The greenstone and the carving were the centrepiece of the Hope Garden outside Helensburgh House and together were called "Tumanako" which signified hope.

Consumer adviser to mental health services Graham Roper, who had permanently loaned the pounamu to the Southern District Health Board (SDHB) mental health sector, said he was devastated by the news.

"It became a touchstone for anyone who came through the services ... It had a little flaw in it which in itself represented the journey of recovery for mental illnesses."

He said where it had sat, in the two arms of the carving, signified trust and love.

A lot of effort had gone into fundraising for the completion of the garden as it was not funded by the DHB.

"Out the front of Helensburgh House was just dire ... we just found ways to develop it."

He said he took photos of the greenstone and made collages which he sold to raise money for the garden.

Mr Roper had been given the pounamu by the tangata whenua of the South Island’s West Coast.

He said it was "priceless" to him.

Police have been informed and Mr Roper hoped it would be found and returned to the garden, where it had been since 2009.

"[Whoever stole it] is somebody who just sees it as a piece of pounamu that they want . . . [They have] no concept of the significance and what it actually means."