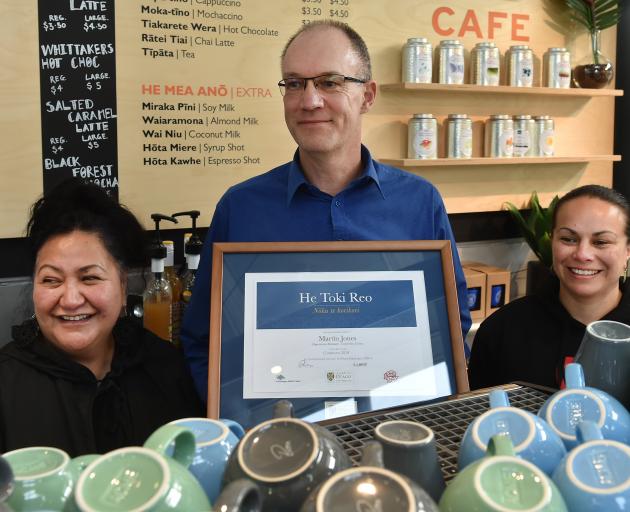 University Union operations manager Martin Jones was presented with a special He Toki award yesterday for work introducing bilingual signage in seven of the nine cafes he oversees for the university.

The award was presented by the university's office of Maori development, in collaboration with Te Runanga o Ngai Tahu and the iwi's Christchurch-based language team Kotahi Mano Kaika, as part of Maori Language Week.

It was one of a series of events held at the university to celebrate the week.

Mr Jones said it was ''wonderful'' to be recognised for the work, which started two or three years ago, and he saw it as a foundation to introduce more Maori signage.

''We are very proud of the efforts we are making here at the university.''

Some drinks with Maori translations could be guessed, such as kapu-tino and moka-tino, but others such as kapu ti kawe (cup of tea takeaway) were not necessarily obvious.

Kotahi Mano Kaika member Victoria Campbell said it was encouraging to see Maori words being put before the English ones and it sent a ''really strong message''.

Maori students' association Te Roopu Maori also organised events on the Union Lawn including weaving lessons and a barbecue where people had to say their mihi in order to receive free food.

''They are pretty accepting. They are probably hungry so they don't mind.''

The number of Maori students enrolled at the University of Otago is due to hit 2000 this year - about 12% - as the university moves closer to its goal of population parity with its enrolments.

Kia ora: To go, thank you

Kia hia ka huka mahau?: How many sugars would you like?