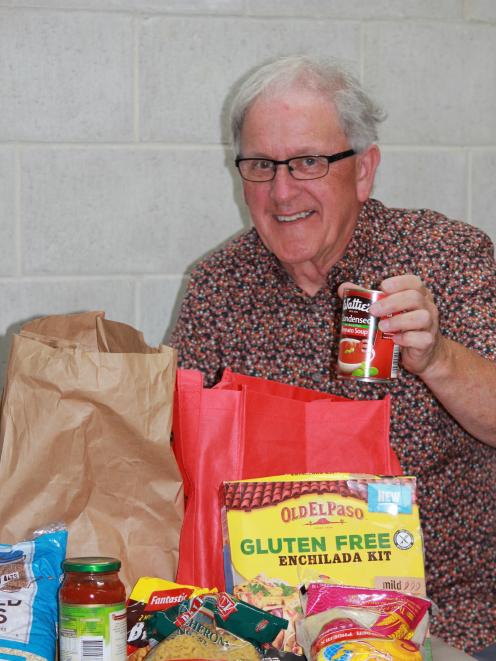 Society of St Vincent de Paul Dunedin volunteer Charlie Pringle packs another food parcel for a family in need.PHOTO: JOHN LEWIS
Families face tremendous financial pressure at this time of year as bills from the festive season come due for payment, while they try to cover the costs of getting their children back to school.

In extreme cases, it means some families have to keep their children home from school for the start of the year until they can afford a school uniform, and others go without food in lieu of shoes, clothes, electronic devices, stationery and school activity fees.

‘‘When food is the only variable cost in a family’s budget and other costs go up, then the amount that they spend on food goes down.’’

‘‘The effects on children of not having the right uniform, school resources and being able to take part in school activities such as trips is very detrimental.

‘‘The pressure to fit in and not appear different can be huge.

‘‘Some families don’t send their kids to school because they don’t have any money for lunch in amongst all the other costs.’’

Both organisations expected there to be a significant increase in demand for support over the next few weeks.

‘‘I think it has started already,’’ Ms Strang said.

‘‘People are certainly citing Christmas and school holiday bills when they come in asking for food.’’

Fortunately, Dunedin’s food banks were well stocked with canned food for this time of year, she said.

‘‘We had the community can appeal at the end of last year, which is always a huge boost, and Christmas is always good because people are really generous.’’

However, there were items that the foodbank still needed.

‘‘Toiletries are always good at this time of year, because when families are in need they tend to put toiletries like deodorant and shampoo at the bottom of their shopping list.

‘‘Then the risk of bullying increases and it affects their self-esteem.’’

Ms Strang said while the food bank had plenty of canned food, there was still a need for other types of food.

Things such as milk powder, cereal and sugar would be gratefully received because it meant children could have a good breakfast before going to school each morning.

Food for school lunches would also be appreciated, she said.

‘‘Things like muesli bars, biscuits and juice drinks. They help tide families over until they get back on their feet.

‘‘Fresh fruit is always good to get, but we’ve got to be careful that we don’t get too much because we may not be able to give it away quickly enough [before it rots].’’

Dunedin Budget Advisory Service manager Andrew Henderson said the service had tools to help families that were struggling to pay bills and help them cope with the financial pressure.

This time of year was what he called ‘‘the triple whammy’’.

He said there were Christmas bills to pay, back-to-school costs, and the costs associated with children being at home on holiday - like the cost of keeping them entertained, and working fewer hours to provide child care.

‘‘It’s not like they are unexpected costs. You can plan for them.

‘‘The time to budget for Christmas is actually in January.’’

He said anyone needing help with Christmas budgets was welcome to visit the Dunedin Budget Advisory Service.

‘‘There are ways to help with that - things like Christmas savings plans, supermarket Christmas loyalty schemes that you pay money into regularly over the year - they all help take the pressure off when those additional costs come in at the end of the year.

‘‘We’re free, we’re confidential, and we can help people who are in financial difficulty.’’