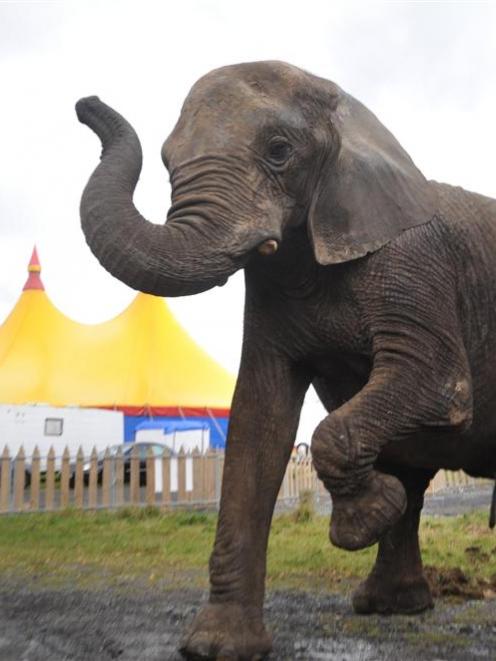 The 35-year-old elephant was banned from city reserves following a DCC meeting last week, which overturned a previous exemption and left circus owners with a jumbo-sized accommodation problem.

In an effort to circumvent the ban and keep Jumbo near the circus, which is based at the Oval, Loritz Circus management struck a deal with nearby The Kensington pub, allowing her to reside on land at the rear of the car park.

However, after setting up the elephant's enclosure yesterday morning, circus staff were informed by parks and reserves team leader Martin Thompson the elephant was still on council reserve land.

Mr Thompson said the land at the rear of the pub belonged to the council, and exotic animals, such as Jumbo, were not permitted in that area.

"I have left it to them to sort out," Mr Thompson said.

And sort it out they did, with Jumbo heading for a new temporary home - the tavern car park.

Circus manager Markus Loritz confirmed he had struck another deal and will move Jumbo's enclosure, which is about the size of two tennis courts, and personal trailer 50m on to the pub-owned car park this morning.

"She is looking forward to the move," he said.

The Kensington owner/operator Alan McNabb said he was happy to host the elephant in the pub car park.

"It should help with business," he said.

Loritz marketing manager Paul Johnson said he was disappointed by the council's latest move "because the majority of people in Dunedin want us there".

Mr Johnson said he would like the council to apologise to the circus for its mistreatment of the situation.

"We don't want to gripe and complain, we just want them to accept that they were wrong."

The Loritz Circus will open today, finishing in Dunedin on April 26.