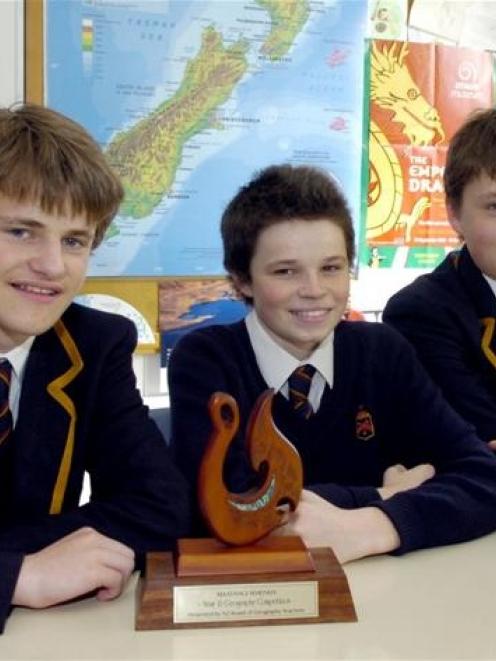 From left, John McGlashan College Year 11 pupils Duncan Wilson, Andrew Dysart and Nat Christensen (all 15) display the trophy for winning the Maatangi Whenua National Geography Competition. Photo by Jane Dawber.
It was a case of "slowly but surely wins the race" for John McGlashan College geography pupil Andrew Dysart when he won the individual category of the Maatangi Whenua National Geography Competition in Wellington last weekend.

The annual competition consists of a geography quiz, essay writing and an orienteering round of geographical sites.

It was during the latter event that Andrew said he gained the crucial points which put him ahead of second-place winner and fellow school pupil Nat Christensen.

"Everyone else did it really quickly. I just took my time and I ended up getting top marks in the category. I guess you could say it was a bit like the fable, the tortoise and the hare."

Andrew and Nat also had success in the team event when they joined forces with another John McGlashan pupil, Duncan Wilson.

They won the event 15 points clear of the other competitors.

The team was selected to compete in the national final after winning the Southern Region Maatangi Whenua Geography Competition earlier this year and their success in Wellington was a surprise, Nat said.

"It was quite different from the regional competitions."

The three pupils are now waiting to hear if they will be selected to represent New Zealand in the International Geography Olympiad in Japan next year.