By Mike Houlahan
0 Comments
A group of Otago teenagers have been given the task of guiding their peers and the public through some of the most famous teenage writings of all time.

Otago Girls' High School is about to play host to an international touring exhibition on Anne Frank's life, created by the Amsterdam-based Anne Frank House museum.

As well as detailing the Dutch teenager's life and her death in the Bergen Belsen camp in 1945, the exhibition also contains material on discrimination in the modern era and two panels specifically relating to New Zealand. 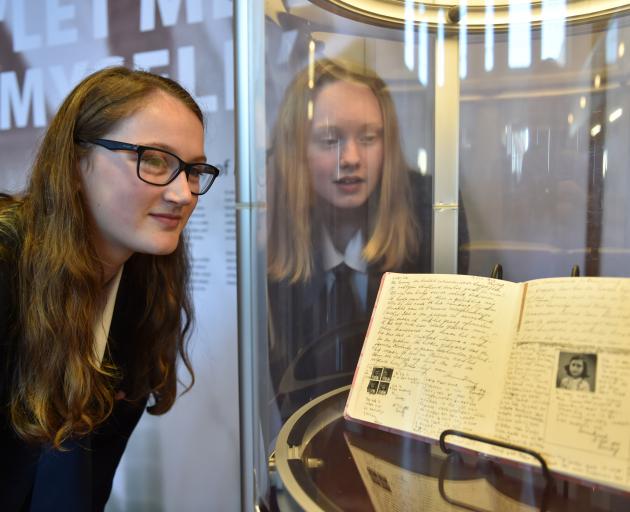 Otago Girls’ High School pupils Grace Twaddle (left) and Victoria Couper examine a replica of the diary of Anne Frank. The 15-year-olds, who will guide visitors through an exhibition on the Dutch teenager’s life, are the same age as Anne Frank when she died in the Holocaust. PHOTO: GREGOR RICHARDSON

To help connect the exhibition's audience to its subject matter, guides from Otago Girls' and John McGlashan College have been trained to use their youthful voices to tell one of the most powerful stories to come from World War 2.

"Two-thirds of the group have already read the diary, and not only have they done that but they have an understanding of her story," Lizzy Eaves, the education manager at the Holocaust Centre of New Zealand - which has brought the exhibition to Dunedin - said.

"She was a young girl, just like they are: many are the same age as her, and it's a universal and powerful story."

As well as printed material and photographs, the exhibition includes a model of the Anne Frank house, a replica of the diary and two authentic relics of the era: a Nazi propaganda booklet and a Jewish Star of David.

"Through the Holocaust Centre I work with three survivors who talk regularly to school groups and we are very lucky those people still survive," Ms Eaves said.

"But we are very fortunate to have a second generation of survivors coming through who can share their parents' memories and stories, and so it goes on."

The exhibition will be at the school for a month from Monday; it is open to school parties for its first and final week, and during the school holidays it will be open to the general public.