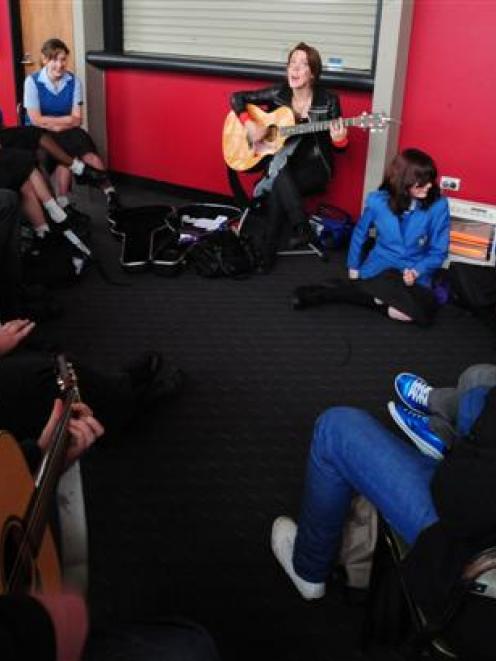 Pupils from 11 Otago secondary schools collaborate on writing a song with Icelandic singer-songwriter Hera Hjartardottir, during workshops at Kings High School yesterday. Photo by Craig Baxter.
Inspiration is everywhere - even in our footwear.

That was the seed sowed to teens interested in music and songwriting from 11 secondary schools around Otago, who gathered at Kings High School to reap the experience of some of New Zealand's high-profile rock musicians.

A workshop by Icelandic Music Awards best singer award-winner and USA Songwriting Competition finalist Hera Hjartardottir initially made some of the male pupils a little uncomfortable when it was suggested the group come up with an "everyday" idea for a song. Wearing high heels was the call from a female pupil.

But once Hjartardottir began strumming her guitar and calling for lyrics to go with the accompaniment, the boys had no qualms about chipping in.

Hjartardottir's workshop was one of six given by some of New Zealand's leading exponents in the music industry, as part of New Zealand Music Month.

More than 130 pupils heard advice on songwriting, using microphones, mixing and mastering recordings, forming a band and how to make money out of making music in New Zealand.