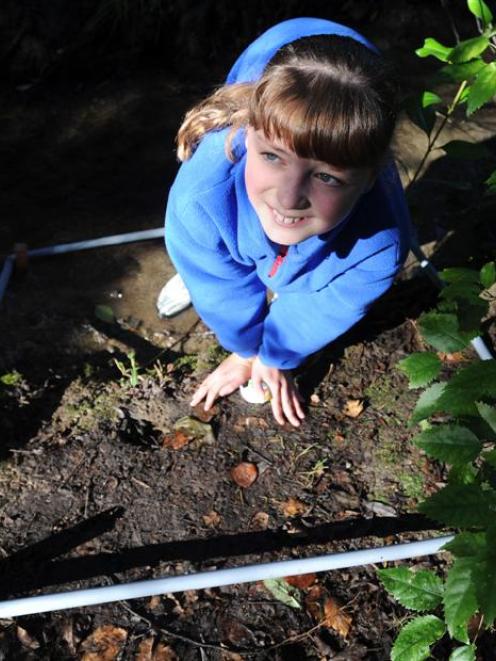 Rhiannon McFarlane (10), a year six pupil at Abbotsford School, takes part in a "Meeting a Metre" science education project, which is raising awareness of the biodiversity to be found in a square metre of school grounds. Photo by Peter McIntosh.
Is it a worm? Is it a reddish millipede? Or is it a slightly weird fungus?

These were some of the questions that about 20 Abbotsford School pupils were asking yesterday when they enthusiastically took part in a grass-roots science project which aims to raise awareness of the life forms which flourish beneath their feet.

The pupils were delighting in discoveries, including one tiny white worm, one reddish millipede, and one small but beautifully-formed fungus.

Project co-ordinator Monika Fry said it aimed to give pupils "a greater awareness of what they're walking on".

"Adults forget that kids like little things. They get excited about them."

The project was proving an "absolutely fantastic" success, with many more schools and pupils involved than she initially anticipated, she said.

About 90 Dunedin pupils, including others at Kaikorai Valley High School, and about 3000 pupils at 32 schools throughout the country are taking part in the national project.

"Meet a Metre" is the brainchild of the Dunedin-based New Zealand Inter-national Science Festival and the Department of Conservation.

Using internet resources and email, the project runs for 10 weeks, until July 3.

Pupils are encouraged to use scientific methods to explore a square metre of school ground, to list their findings and to make suggestions about how to enhance the area.

Scientists from Doc and Landcare are helping identify unfamiliar plants, animals and fungi, and will provide advice on enhancement.