Pupils get hands-on at session on Stone Age life 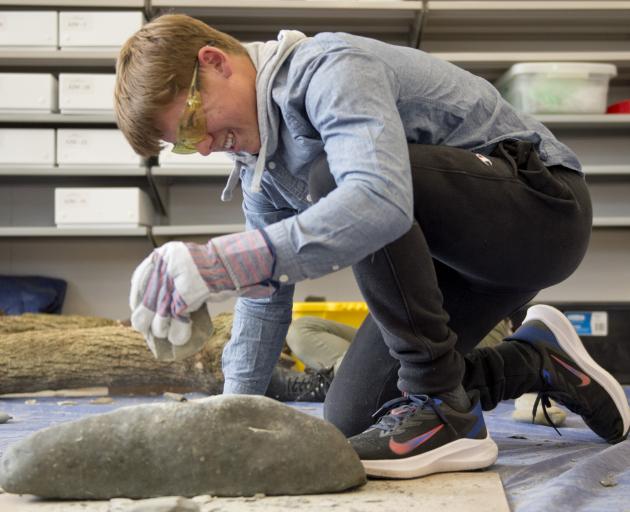 Waitara High School pupil Joseph Hill, of Taranaki, makes a stone tool at the University of Otago’s Hands-On at Otago week yesterday. PHOTO: GERARD O’BRIEN
The initial cacophony of a stone tool-making workshop will settle into a rhythmic, intentional beating of stone against stone as visiting pupils come to terms with their tasks, University of Otago archaeologist Anne Ford says.

About 400 secondary pupils from around New Zealand are in Dunedin this week for the university’s Hands-On at Otago programme. Dr Ford led about 10 visiting pupils through a variety of activities yesterday to showcase how archaeologists learn about Stone Age societies.

Yesterday’s exercise showed how past societies had come to learn about geology, physics and geometry as they shaped the tools they used for everyday life, she said.

The study of the tools and their use helped to create a picture of the cognitive development of early societies, she said.

The tools the pupils were making yesterday at the university were akin to something that would have been made by Homo erectus; it showed there was a lot of learning and planning required to make stone tools, Dr Ford said.

Waitara High School year 13 pupil Joseph Hill, of Taranaki, was among the visiting pupils at the workshop.

While also interested in sports science, he enjoyed the challenge of making the technology used by prehistoric people, Joseph said.

"It’s funny, they probably did it really easy."

He liked the pace of Dunedin as a city and was enjoying his time on the "spread out", historic university campus, he said.

A university spokeswoman said this year the programme attracted 393 pupils from 149 schools.

Hundreds of university students also flocked to the Otago University campus yesterday, at the start of the university’s latest summer school, through which students can gain full credit for one or two papers by studying for six weeks, instead of the usual 13 weeks during the main university study year, school organisers said.