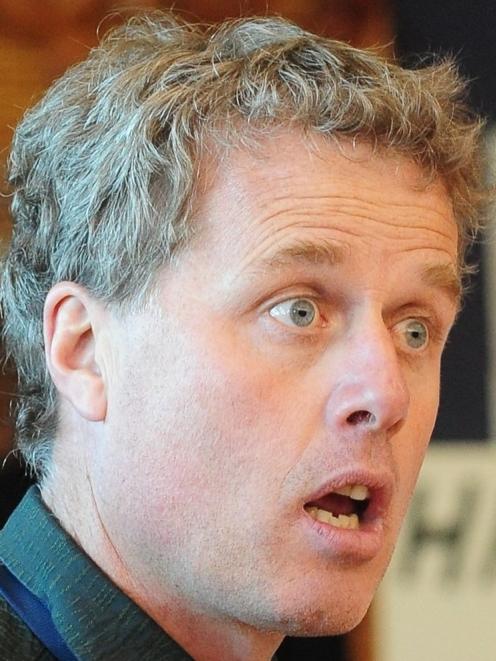 Bryan Scott
An earthquake could render the pump station and floodbanks which keep water off the West Taieri plain inoperable for a "prolonged period of time" and at risk of flooding from Lake Waipori.

There was also a "significant risk the whole Taieri could liquefy into one big soggy puddle", Otago Regional Council chairman Stephen Woodhead said at a recent committee meeting.

The report, the result of concerns raised by the succession of flood events on the Taieri since 2006, brings together all the hazard risks faced on the plain and the interaction between flooding, earthquakes and landslips for the first time.

As the West Taieri Plain was at, or below, mean sea level, it relied on pumping at the Waipori station even during normal low-flow conditions to prevent it from being transformed back to its former "swamp-like state".

Added to the risk was Lake Waipori water levels generally being elevated above the land on the eastern side of the floodbank, making the pump station and floodbanks critical to the use and occupation of land in that area.

"Damage to floodbanks and the Waipori Pump Station even under extremely low flow and tidal conditions exposes a significant portion of the West Taieri Plain to flooding due to incursion of water from Lake Waipori."

The report will be given to the Mosgiel-Taieri Community Board and Dunedin City Council in coming weeks.

It outlines how the majority of the plain could be susceptible to liquefaction, that many sections of the foundations of the Lower Taieri Flood Protection Scheme floodbanks could fail and landslips on the margins of the plains were common.

Cr Sam Neill said the council should not alarm anyone, as there were risks attached to everything, but Cr Bryan Scott said if he lived on the Taieri he would be sleeping with the report under his pillow.

"Most people are damn ignorant of the environment they live in," he said.

Cr Michael Deaker said the vulnerability of the council's "mega-million-dollar" floodbank investment was a "horrible thought".

Environmental engineering and natural hazards director Gavin Palmer said the council was investigating the risks and mitigation options available to deal with the Waipori station and floodbank risk, especially given high tides on the same day an earthquake struck could lead to significant flooding.

There were also risks posed by faults disrupting watercourses and drainage across the Taieri.

"We are aware of it and can be ready for it but I'm not sure we can reduce the risk."

ORC chief executive Graeme Martin said too often with risks there was a sense they should be avoided at all costs, but most risk was not worth avoiding - instead, people should have the knowledge of how better to live it with it.

The Otago Regional Council was not responsible for avoiding risk but it was for being aware of the risk and giving consideration of how to live with it.

Councillors called for the report to be circulated as widely as possible among the Taieri community as well as in "every DCC councillor's pigeon hole".

Dunedin International Airport chief executive John McCall said the airport's own seismic study - done since the Canterbury earthquakes - had shown that while the terminal building had been built with much of its essential services above levels of the 1980 floods, the airport's own pumping systems would be vulnerable in an earthquake and if the regional council's pumping system failed, the airport would have nothing to pump into, which would impact its business.

Dunedin City council operations general manager Tony Avery said the council would be updating its hazards register and civil defence planning to reflect the updated information in the report and was reviewing its approach to dealing with hazards information.