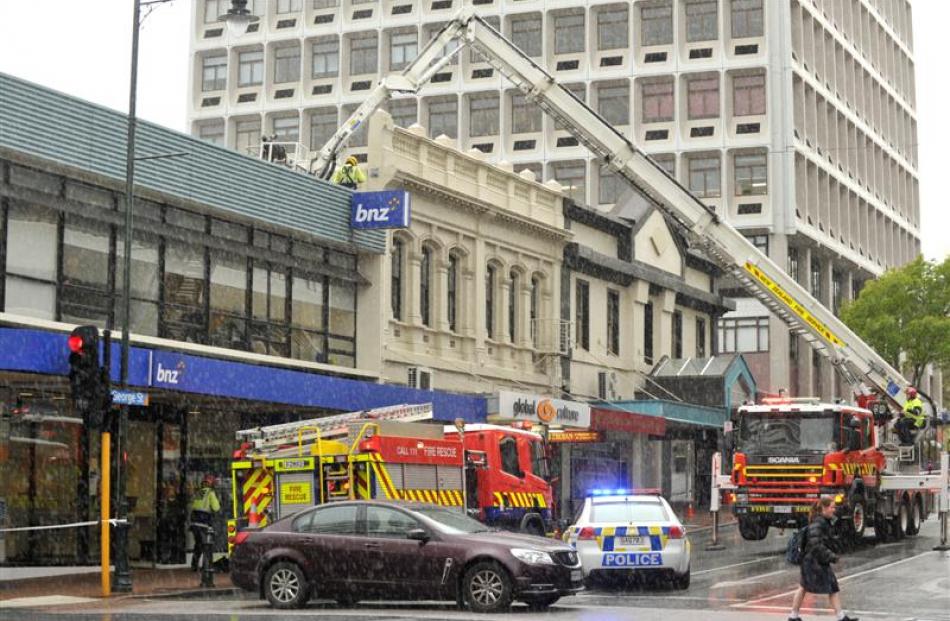 A cable running from a George St building across the street is taken down after a crack was discovered in the parapet of the building. Photos by Christine O'Connor. 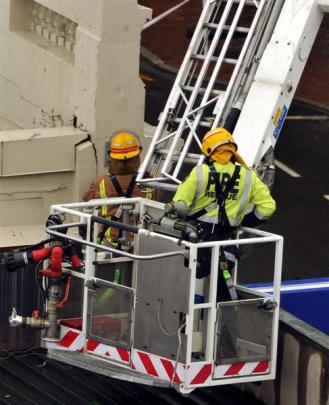 A central Dunedin building evacuated yesterday because of fears its facade might collapse on to the footpath below, was earthquake-strengthened two years ago, the Dunedin City Council says.

A photo sent by the building owner to the council showing a 25cm-long crack in the parapet sparked a call to the Fire Service asking for a cable, strung between the building and the ANZ across the street, to be taken down.

George St was cordoned off and two businesses located in the building, Trojan Turkish Cafe and Global Culture, were evacuated about 2.15pm.

Senior station officer Jason Hill, of Dunedin, said the council was concerned the cable might have contributed to the crack or was making it worse.

''There was no sign that the cable was causing [the facade] to lean out.

''It's an old building [and] supposedly it's been earthquake-strengthened ...

''I suspect [the parapet] has slumped [causing the crack].''

There was no slack in the cable, which indicated the crack had not appeared because of that, Mr Hill said.

Council building services manager Neil McLeod said the heritage building was strengthened ''recently'' and a structural engineer assessed it and had deemed it structurally sound.

He said he had no idea what had caused the crack but there was a ''possibility'' it might worsen if a banner was hung from the cable.

He had ''no concerns'' about the facade falling.

''The thing is extensively strengthened,'' he said.

Sergeant Phil Hamlin, of Dunedin, said it was a case of being safe rather than sorry.

''With what we learned from Christchurch about masonry, we're just a bit more cautious.''

The building owner did not respond to requests for comment.