Questions over consent for Speight's 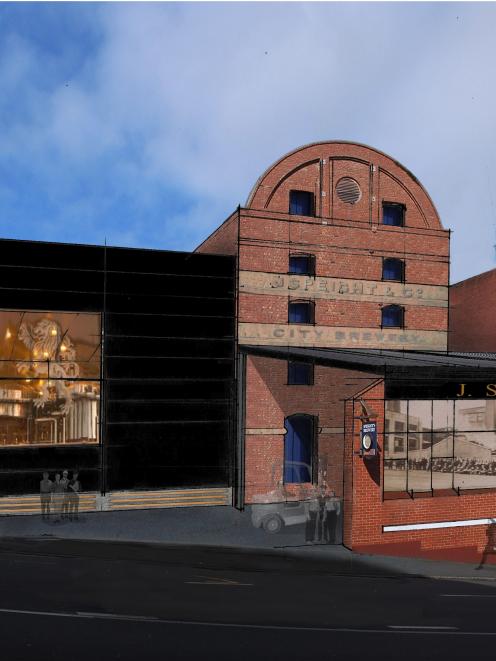 Artist's impression. Image by Jackie Gillies and Associates.
Heritage advocates are questioning why the public was not given a say about the demolition of a protected part of Speight's Brewery in Dunedin.

Lion, which owns the brewery, this week announced details of its $29 million upgrade of brewing facilities at the Speight's brewery, including plans to demolish the existing sales office on Rattray St.

The demolition was needed to accommodate modern brewing facilities. The old sales office would be replaced with a new entrance, facade and glass frontage.

Dunedin heritage advocates Peter Entwisle and Elizabeth Kerr questioned the council's decision to grant consent without prior public notification, which would have led to public submissions and a hearing.

The documents also confirmed the building's facade - including the front of the sales office - was part of a protected townscape under the council's district plan, meaning demolition was against the rules.

Despite that, council staff opted to grant consent after concluding any adverse effects of the redevelopment would be no more than minor, and no special circumstances warranted public notification.

Mr Entwisle said yesterday he believed the brewery's plans were a "good compromise" for the site, but retained some concerns about the new design and the imminent loss of the sales office.

Despite that, Mr Entwisle said demolition would provide better views of the larger brick and arched R.A. Lawson-designed building partly hidden behind it, which would also be strengthened.

"It's a very, very good thing that Speight's want to invest in Dunedin ... Who else would put their hands in their pockets and do it otherwise?"

Ms Kerr believed the company's consent application should have been publicly notified "as a matter of course".

The project was supported by the New Zealand Historic Places Trust after earlier plans for more demolition within the brewery were substantially modified, Lion staff said at Thursday's briefing.

NZHPT Otago-Southland area manager Owen Graham said he had been discussing the project with Lion since December, and supported the company's efforts to retain "as much heritage as practicable".

The consent decision, signed by council planner Kirstyn Lindsay, acknowledged the brewery's significance, but said the redevelopment was "merely the latest" change in a long history.

The brewery was established in 1876, but only its facades and "bulk appearance" were protected by district plan rules.

Lion communications manager Judy Walter stressed yesterday heritage considerations were a major part of planning, as the company worked with NZHPT and council staff, commissioned a heritage report, and "quite significantly" revised its plans.