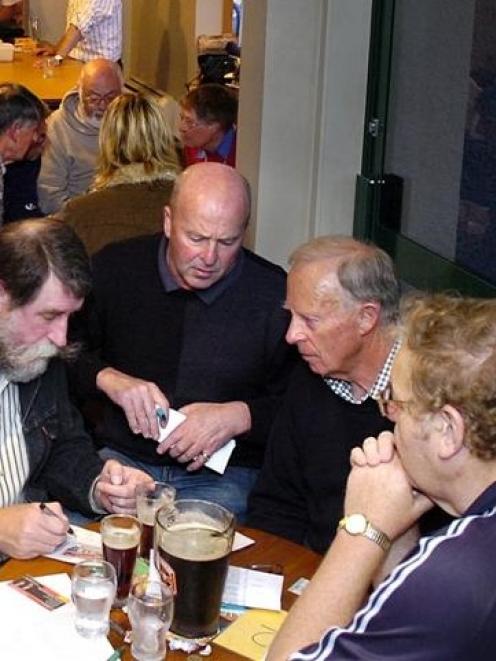 Four of the six-member Famous Five quiz team (from left) David Ross, Russell Williams, Alan Askey and Kevin Cowie, ponder a crucial sports question. Photo by Jane Dawber.
Dunedin's longest-running regular quiz night, at the Shiel Hill Tavern, is back to normal after an electrical fire in August forced the tavern to close its bar for six weeks.

The quiz night has been running for about 20 years and publican Dave Belcher estimates it has raised more than $1.5 million for community groups.

Because the tavern had no power, and alarms were not working, he was forced to spend several nights sleeping at the tavern, armed with a torch.

However, despite these problems, he and son Tim managed to keep the tavern's Wednesday night quiz going - transferring the event to the Pirates Rugby Club.

The quiz has now returned to the tavern's refurbished bar and once again two old foes are competing for top honours.

The six-member Famous Five team has the longest association with the quiz night, although over the years it has struggled to hold top spot against the Rattray St Rats, who have a slightly better success rate.

Famous Five member Alan Askey (70) still remembers his first night, 20 years ago, when he was able to name the two organisations that put a cairn to Quinton McKinnon on the Milford Track.

"It just so happened that a month or so before I had been through the track and I knew that it was the Gaelic Society and the Otago Rugby Football Union. There were gasps of amazement."

Mr Askey says teams must contain a good "sports brain" to do well because a quarter of the questions are to do with sport.

Occasionally, teams find that the quiz master has the wrong answer but one of the rules of the event is that even when the quiz master is wrong "he's right on the night".

"I've been at quizzes where all sorts of arguments and nastiness goes on and you can't have it . . ."

Tim Belcher (27) has taken over the quiz master's role at the tavern this year and estimates that by the end of the year he will have researched, written and asked 3000 questions.

He believes it benefits the tavern by bringing in new people and it benefits community groups that are lining up to be involved.

"It's a good way to get money out of friends and family without actually asking them for it."

The quiz usually attracts between 80 and 120 competitors in teams of six and Dave Belcher says, for many, it is their one night out of the week.

This week's quiz was in aid of the Andersons Bay Bowling Club and although they slipped a point on the second double-header - the name of Captain Hook's ship and the name of the last book in the Chronicles of Narnia - the rats once again won the $72 top prize.