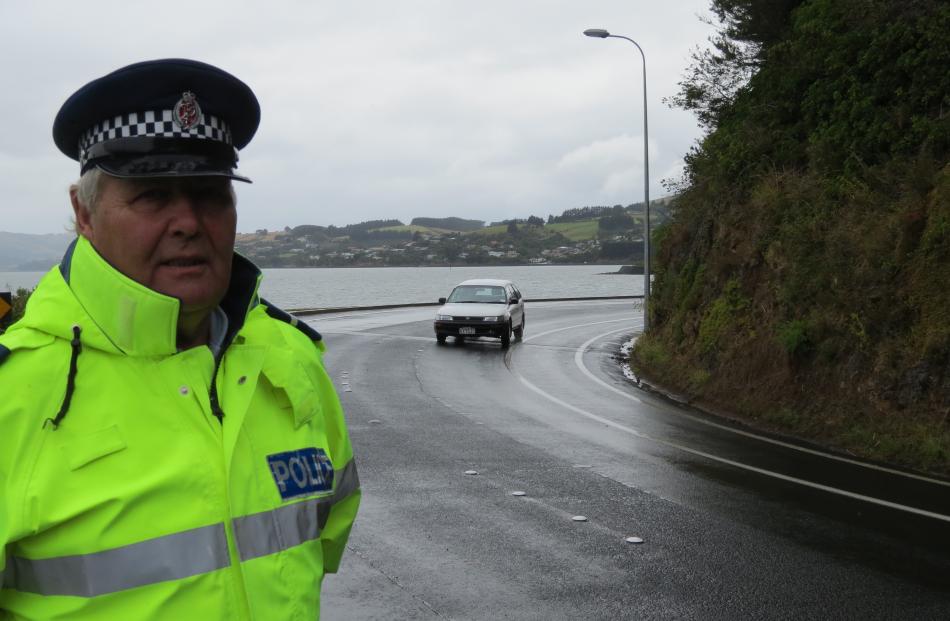 Senior Constable Lox Kellas, of Portobello, surveys a Portobello Rd corner that has been the site of crashes caused by summer ice. PHOTO: JONATHAN CHILTON-TOWLE

Slipping and sliding on Dunedin's roads is something usually associated with winter but, after a long dry summer, a few drops of rain on the road can be just as dangerous - thanks to a phenomenon known as summer ice.

Dunedin drivers are being warned to watch out for the ''summer ice'' that can make our roads unseasonably slippery.

Summer ice is an invisible, slippery film that can form on road surfaces when rain follows long periods of hot weather. It can cause motorists to lose control of vehicles, just like on black ice in winter.

On Otago Peninsula, summer ice has been a constant threat during the holidays.

Portobello-based Senior Constable Lox Kellas said summer ice had been a factor in four of the nine crashes that occurred on the peninsula during the holidays.

He said an unreported crash in Portobello Rd recently might also have involved summer ice.

None of the accidents resulted in injury.

Snr Const Kellas urged residents to report all accidents. Reporting an accident would not necessarily result in prosecution but it did help authorities identify the areas where crashes regularly occurred and take measures to prevent serious accidents, he said.

Finding out how many crashes had occurred due to summer ice in the wider Dunedin area was more challenging.

A Dunedin police spokesperson said the crash figures for January and December were not yet ready to release and, according to the New Zealand Transport Agency (NZTA), crashes attributed to summer ice were not recorded specifically as they were broadly categorised as ''loss of control in wet conditions''.

However, the agency had issued one summer ice warning in Dunedin in the past 12 months, on April 3, 2014.

She was also raising awareness of the danger via the Facebook page ''Crash Hot Dunedin''.

NZTA chief safety adviser Colin Brodie said summer ice was especially prevalent at the moment due to a long dry summer.Following an extended run of warm dry weather, the tiny particles emitted by vehicles' exhausts and other fine dust particles gradually built up on the road surface because they were not washed away by rainfall, Mr Brodie said.

Light rain was not intense enough to wash away the particles, which sat on the road creating a slippery film, he said.

Drivers could stay safe by reducing their speeds, increasing following distances, taking extra care, and making sure to check the air pressure and tread level of their tyres.