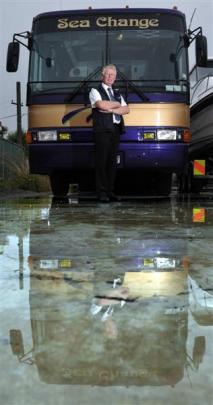 Rally control team member Brian Wolff is looking forward to pulling his own motorhome out for Easter's event at the Mosgiel A&P Show grounds. Photo by Craig Baxter.

An economic boost to the Taieri of about $500,000 is expected when nearly 800 motorhomes and caravans pour into Mosgiel at Easter.

The New Zealand Motor Caravan Association's National Easter Rally is being held at the Mosgiel A&P Showgrounds from April 17 to 21.

It is expected to attract motorhomes and caravans from around New Zealand.

Rally control team member Brian Wolff, of Sawyers Bay, said rally participants were also being encouraged to come early or stay on afterwards, as well as take part in a variety of activities in the region, bringing an estimated $500,000 economic boost to the area.

Activities at the rally's ''base'' at the showgrounds included a marquee being put up in the arena to provide a gathering point, entertainment, and also workshops around motorhome ownership.

Mosgiel Business Association president Blair Arthur said supermarkets, pharmacies and cafes would probably benefit the most from the influx.

''It'll be like a cruise ship coming to Dunedin.''

As many would be setting up their caravans and motorhomes for the whole extended weekend, Mosgiel would become their ''hub'', increasing their reliance on the services the city provided, he said.

Given it was Easter, trading hours would be restricted for many businesses, so the benefit would be less than if the event was held on a normal weekend, Mr Arthur said.

The association had passed on a list of its members and their services to be included in the registration packs going out to all participants, he said.

Mosgiel Community Board deputy chairman Mark Willis said the organisers had presented to the board, making them aware of the event and its impact.

The board planned to be a conduit between organisers and those in the wider Dunedin community which could benefit from the extra visitors.

Having the event in Mosgiel showed again how the ''satellite'' area was growing. It also showed the need to look at the bigger picture when talking about amenities such as a pool, he said.

As well as the motor caravan association's Easter rally, numerous rallies were held during the year.

The total contribution to New Zealand's economy from the 225 area rallies held in 2012 was $4.2 million, according to the association's internet site.

The association's records show the average member spent 75 nights away from home per year and $78 a day while travelling, over and above camp site fees.