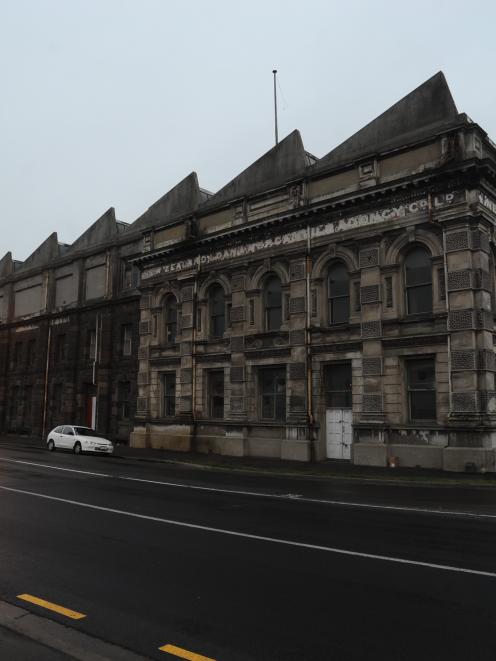 The New Zealand Loan and Mercantile Agency Co Ltd building in Thomas Burns St which has attracted rates relief from the Dunedin City Council. Photo by Peter McIntosh.
A prominent and historic Dunedin harbourside building has been given rates relief - and is awaiting a major tenant - as the city looks to find ways to save its built heritage.

The New Zealand Loan and Mercantile Agency Co Ltd building in Thomas Burns St has been granted rates relief for three years under a policy set up to preserve heritage and townscape buildings.

The policy, introduced recently, widens the criteria under which owners can apply for rates relief.

Dunedin has an overcapacity of built heritage and remains too small to make all such buildings economically viable. Some historic buildings have tumbled recently due to structural deterioration and disrepair.

The 50% rates relief will total $5244.27 over the period, which owner Russell Lund said would help towards stabilisation work for the building, that despite its age, was well-built and in good condition.

And while a new use was not yet settled, Mr Lund hoped a major tenant could be found, and access across the railway line at Rattray St built, for a building viewed as an essential element of the Dunedin harbourside redevelopment.

Under the council's rates relief guidelines, owners of heritage buildings undertaking major restorative works may be eligible for rates relief.

Rates relief is allocated from a contestable fund. When making a decision the council considers the level of investment - the usual minimum threshold is $100,000 - the significance of the building, its use and its location.

While it did mean help for owners, Dunedin City Council finance, strategy and development chairman Cr Syd Brown said it also raised the capital value of the buildings, meaning an increased rate take in years to come, effectively returning money to the city.

Cr Brown said it was satisfying "to make this practical contribution to preserving the city's built heritage for the enjoyment of future generations of residents and visitors.

Council heritage policy planner Glen Hazelton said the building had received the funding based on the owner's plans to re-use the building for mixed-use development.

The earthquake strengthening was a significant component, and would be the first stage of the work.

Mr Hazelton said the building was "pretty iconic" in Dunedin.

Its location was an important aspect of that, as was its quality, age and history.

"Compared to most of the other buildings down by the harbour, it is one of the grand buildings.

"I would say it defines the whole area."

At the time the area was zoned for port and industrial use, but a district plan change allowing the harbourside to be redeveloped with apartments, bars and cafes was approved in 2009, following a nine-day hearing in 2008.

Mr Lund said there had been interest in the building from a variety of sources.

Tertiary institutions went some way down the road to tenanting the building, though had not gone ahead, and Mr Lund said his company had considered accommodation, retail and hospitality.

The "key to the puzzle" was access across the railway lines from the Chinese Garden.

A Rattray St pedestrian and cycle bridge to the harbourside, to be built beside the Chinese Garden at a cost of up to $3.5 million, has been proposed by the council for 2016.

The zoning change allowed a wider range of activities, as did the 2000sq m floor space, but the land being leasehold brought limitations.

"We need one or two anchor tenants," Mr Lund said.

He planned to "stabilise" the building, which was "dry as a bone".

First in, last out

• Built in 1872 for stock and station agents Driver Stewart Co
• Constructed with stone quarried from Water of Leith, the Town Belt, and Chalmers
• Originally known as the Otago Wool Stores Occupied by NZ Loan & Mercantile Agency Co until the 1960s Owned from 1960s by Stewart's
• Transport; indoor karting facility added in 1991
• Now used for storage
• Listed as a category 2 historic place