Pupils ponder their next moves at the Otago-Southland Interschool Teams Chess Championship at Logan Park High School in Dunedin on Saturday. PHOTOS: PETER MCINTOSH
The resurgence of chess has led to record numbers of participants in an Otago and Southland event and the players are loving it.

High school pupils from around Otago and Southland gathered at Logan Park High School on Saturday for the Otago-Southland interschool teams chess championship. 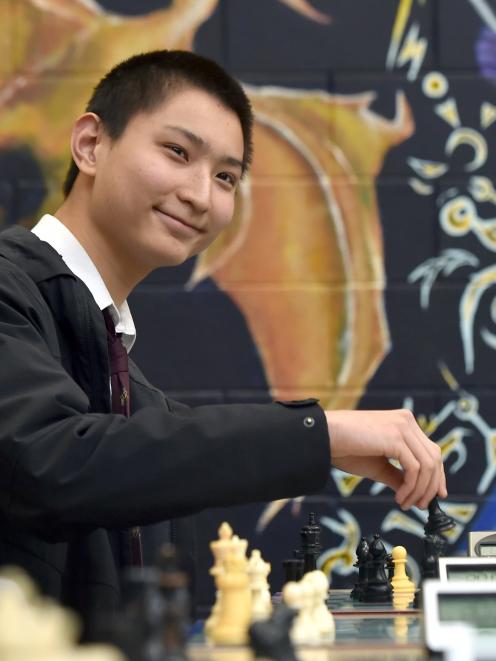 Logan Park High School pupil Alexander Sun makes a move.
The increase could be because of the popular new Netflix show The Queen’s Gambit and the number of people who picked up chess during the Covid-19 lockdown last year, he said.

Chess was a great sport for secondary school pupils, as it encouraged players to study and practise hard, which directly transferred to their ability to study outside chess, he said.

The winning team from each region, Logan Park High School in Otago and Southland Boys’ High School in Southland, would continue on to the national tournament in October.

The tournament might have looked serious and intimidating to begin with, but once the pupils settled in it became a fun, social event for all, Mr Johnson said.

Alexander, who won the 2019 Otago-Southland under-20 chess championship, said competing in this environment was his favourite.

At higher levels, chess could be too mathematical and serious, but he loved getting excited with his team-mates and meeting new people between games.

And there was a lot of excitement to be had, with one match ending in a checkmate just as the clock hit zero.

Mutual respect between players and the atmosphere made the game fun, regardless of whether you won or lost, he said.