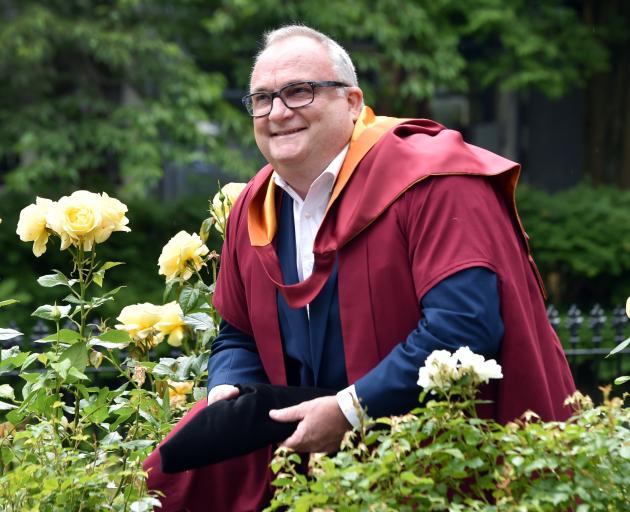 James Wilkes was among the first students to graduate from the University of Otago with a doctor of business administration degree. PHOTO: PETER MCINTOSH
A change of direction is needed urgently if the future of New Zealand’s red meat industry is to be salvaged, a researcher warns.

"When I dug into this I could see that most of it is not fantastic,’’ University of Otago researcher James Wilkes said.

Four other people were also in the first cohort to gain the degree, including two Chinese students whose graduation was celebrated at a Zoom event.

Mr Wilkes examined the red meat industry and his research drew on the work of an influential marketing thinker, Prof Theodore Levitt, who developed the theory of “Marketing Myopia” in the 1960s.

Mr Wilkes said the New Zealand red meat industry "can’t see the wood for the trees’’ and his findings were "a wake-up call about looking after your customers”.

Producers often thought of meat in terms of high volume, but few fully considered the consumer, and asked "What do you think of the flavour?’’

New Zealand’s model of marketing red meat (beef and lamb) was outdated, commodity driven, and farmer earnings were too limited.

Overseas interests were buying our processing plants and, given limited profitability, the annual reports of big meat processors “read like a horror story”.

Improvements could be made, but more focus was needed on the higher end of the market, and sustainability.

The industry’s challenges included community concerns about the environment, and water quality, and the growth of alternative protein products competing for the overseas hamburger market, he said.

2015, the Otago DBA is aimed at business professionals seeking a challenge, and students continue to work full-time while studying.

I have no doubt that Dr Wilkes research is right on the button. The red meat idustry, despite some minor tinkering has basically remained the same since the second world war.
My only concern about the coming revolution in the industry, for surely it must come, it that the taxpayers of NZ will have to pay for it.
Let's remember that we are a capitalist country, we operate in the free market. There is no place for the NZ Govt, (also known as the NZ taxpayers) to invest in this change.