A Red start to the school year 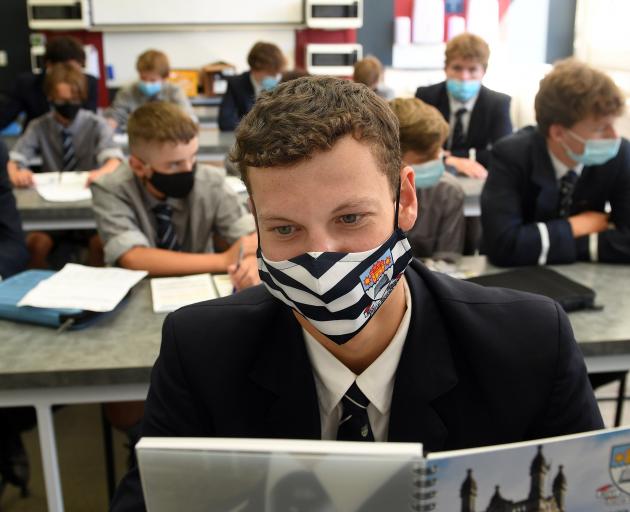 Back to school on the first day of class is Otago Boys’ High School year 13 pupil Luke Moffitt in Dunedin yesterday. PHOTO: STEPHEN JAQUIERY
Between compulsory masks in class and assemblies over livestream, pupils across the South returned to a school system that looked a little different yesterday.

The school year has begun as pupils return this week.

Under Red, pupils have to follow new guidelines, including compulsory face masks while indoors.

Otago Boys’ High School year 13 pupil Luke Moffitt (16) said although the masks were a bit inconvenient, he and his peers understood the need for them.

He was excited going into his last year at school and he planned to make the most of it despite the circumstances.

Year 9s and 13s started school yesterday, the rest of the school starting later in the week.

Rector Richard Hall said the school had 190 new pupils, which was the largest increase he had seen since becoming rector in 2015.

Most of the boys were on board with wearing masks.

Wearing masks did pose some issues for teachers, such as how to project their voices and lead classes effectively.

It would take a while to figure out, but with a common-sense approach and some trial and error the school would make it work.

There were a handful of pupils with disabilities or sensory issues who had been given mask exemptions.

Allowing some pupils not to wear masks naturally led to questions from others, so the key was to have good open communication across the school, she said.

Another issue the school would be facing this year was the limits on gatherings.

Under Red no more than 100 people could attend school events, including assemblies.

With a roll of about 1200, the large majority of pupils would need to watch a livestream.

The school would rotate which pupils attended in person, she said.

The restrictions were taking a toll on some schools.

North Otago Primary Principals Association president Kate Mansfield said the principals she had spoken to felt "bogged down with procedures and policies".

Larger schools had had to put measures in place to ensure pupils’ safety, such as splitting schools into groups and having different start times.

The principals’ biggest concern was a lack of relievers and not having teachers to put in front of classrooms.