An emotional welcome has been held for Syrian refugee families in Dunedin, with a spokesperson for the families expressing gratitude and respect for the support shown.

Many of the 49 people to resettle arrived at Dunedin airport this morning to be welcomed by dozens of Red Cross staff and volunteers; the other families would fly in later today. The Red Cross said earlier this week it would be a private welcome and asked the public not to attend.

The 13 families are the first group to be resettled in Dunedin since it was chosen as a new refugee resettlement location last year.

There was applause and a few tears as the families left the plane and made their way past the waiting crowd to a private welcome at the airport's Mangatua room where there were speeches, morning tea and a mihi (greeting).

Walid Abdel Aziz spoke, with the aid of an interpreter, on behalf of the refugees, at times almost breaking up, as he expressed how grateful they were to have been welcomed to their new home.

"On behalf of the Syrians who arrived today from Auckland I would like to present my gratitude, my respect, my appreciation to everyone who welcomed us.

"Thank you for all your smiles, you have planted hope inside of us.''

The Red Cross would accompany the families to their homes and provide support for up to a year. This included connecting people with their community and vital services, such as healthcare, and helping them find employment.

Thirteen state houses had been set aside for the refugees.

The families were a ‘‘fantastic addition to the city and region'' and the Otago Regional Council has given each family $100 of free bus travel through the Go Card scheme.

Council chairman Stephen Woodhead said yesterday the Go Cards were a ‘‘small gesture'', which would allow the families to ‘‘get their bearings and move freely around the city as they establish new homes here''. 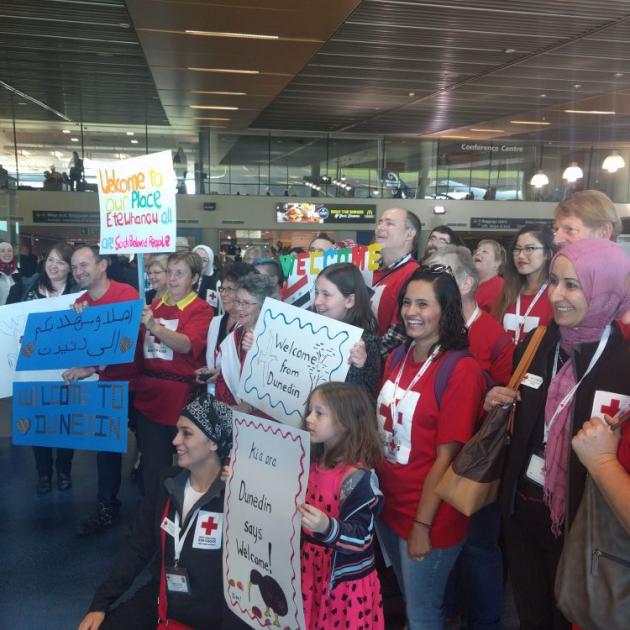 Millions of people have fled Syria since a civil war began five years ago.

The next group was expected to arrive in Dunedin in June.

The team encompasses a diverse range of backgrounds, including former refugees, Arabic speakers and Dunedin locals.