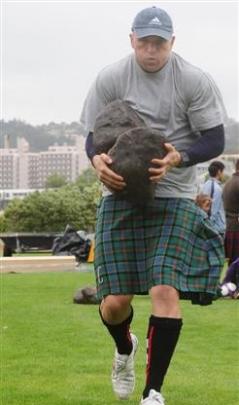 Highlanders fitness trainer Matt Dallow competes in the Carrying the Stones, in which he was second. Photo by Craig Baxter. 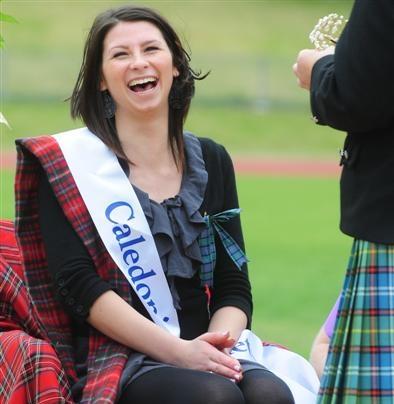 Looking picture perfect and keeping your composure while being blasted by chilly gales is challenging.

But it did not seem to ruffle Edie-Mae Wilkins as she was crowned Queen o' the Heather at the Caledonian Society of Otago Highland Games yesterday.

The 19-year-old Work and Income case manager was one of six contestants battered by strong winds during the presentation at Logan Park.

"There wasn't enough hairspray on hand. But the wind did provide good Celtic atmosphere," she said.

Miss Wilkins was delighted with the honour.

She had never entertained the idea of entering a beauty pageant before and was glad a work colleague had "pushed" her into it.

"Initially, I didn't know what I was getting myself into. But it's been a wonderful learning curve."

She said the other contestants had experience in Scottish dancing and had very close ties with their Scottish ancestry.

"But I don't. I felt like I was on the back foot really. I'm very surprised to have won."

However, the experience had encouraged her to explore more of her Scottish background.

Miss Wilkins will now represent Dunedin at public functions next year, including the Paeroa Highland Games, in Waikato, in February.

The Otago Centre Piping and Dancing Association received the Albert Wheeler Memorial Trophy for the most outstanding performance in the annual games.