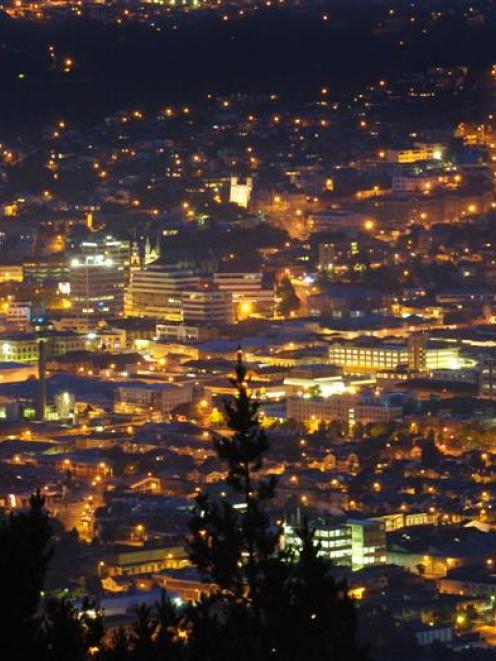 The view of the central business district from Signal Hill. Photo by Gerard O'Brien.
There are renewed calls for the Dunedin City Council to do more to encourage "gentle" commercial development in some of Dunedin's most scenic spots.

He said the bike tracks should be just the start of development on Signal Hill, which was "under-utilised", and in other scenic parts of the city.

Those plans should include a gondola carrying tourists to a restaurant at the top of Signal Hill, if the projects were commercially viable, he said.

Speaking to the Otago Daily Times afterwards, Cr Guest said the proposal was "just an idea" but one he believed should be seriously considered.

He believed the council should look at incentives to encourage private sector investment in such developments, for example offering rates relief or the use of council-owned land.

The council could consider investing in the construction of facilities, which could then be leased to the private sector to operate, he believed.

"Some people will say `shock horror', but the idea of a facility perhaps up near the [Otago Centennial Memorial] monument at Signal Hill would be a good idea, if it was financially viable," he said.

Committee chairman Cr Paul Hudson said the idea of a gondola on Signal Hill had been raised several times in the past 15 years.

"The problem is . . . things like that have to be economic.

"We don't have the population base to sustain a restaurant at the end of a gondola."

There were no immediate plans to pursue the idea, and any proposal would need to be presented to the council's annual plan process, costed, and have public input, he said.

However, Cr Guest said the idea would capitalise on the city's stunning views, providing a boost for tourism and residents' enjoyment of scenic sites.

A facility on Signal Hill would also fit well with the nearby Forsyth Barr Stadium and redeveloped Logan Park.

"It would enhance the trip for visitors to those sporting facilities," he said.

A Signal Hill restaurant would need to be built on council-owned land, but a gondola could cross reserve land, he said.

Other developments should also be encouraged in scenic areas such as Lawyers Head, to take advantage of the "beautiful seascapes", he said.

Developments at Bluff, Moeraki and in St Clair and Roslyn in Dunedin showed what could be achieved, he said.

"We need exciting things like this and we haven't got as many as we should have," he said.

Councillors at this week's committee meeting gave initial backing to building new mountain bike facilities on Signal Hill, which was first raised in an annual plan submission earlier this year.

Councillors approved construction of the climbing grade shingled track, at no cost to council, but requested more information before voting on the rest of the proposal.