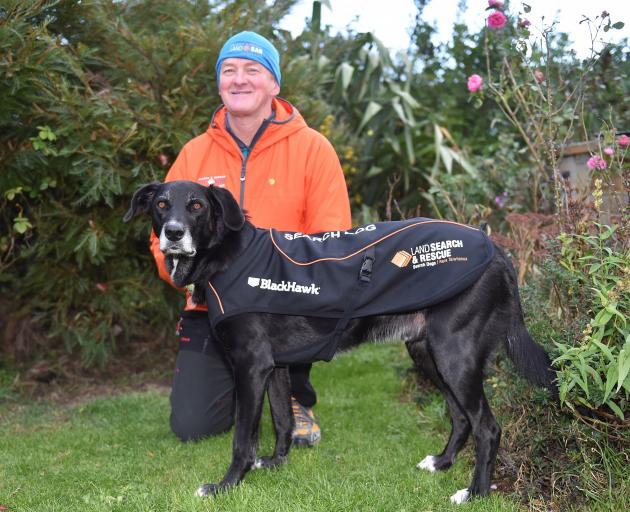 Land Search and Rescue (LandSAR) member Dermot Mayock said he had been involved in searches since he came to New Zealand in 2001.

Originally from Ireland, Mr Mayock first got involved in search and rescue operations when he was living in Wales in 1989.

That was his first exposure to search dogs, and he discovered how much he enjoyed working with them.

All his dogs were named after figures from Irish folklore.

Any working breed was usually pretty good, but it was important to have an agile dog with a good nose.

CuChulainn’s huntaway bark could be heard from a good distance in windy conditions, Mr Mayock said.

The dogs needed to be well socialised and stocktrained so they did not get distracted during searches.

Usually a dog would be deployed on a search to find missing people by either tracking ground scent or air scent.

The ultimate training goal of a dog handler was to qualify a dog for both, which was quite difficult, Mr Mayock said.

Handlers had to have the normal LandSAR skillset and the ability to use a dog on top of that.

The team attended about 15 callouts a year, all of which were different.

Each search had the potential to become quite emotional, which was the hardest part of the role.

It was important to keep focused on the task at hand and to remember that LandSAR was there to help others and not to get injured themselves.

Everyone had their own way of coping with the emotional toll of searches, but support from colleagues was very important, Mr Mayock said.

Although the busy lifestyle was not for everyone, raising a search dog was good fun and the relationship between a dog and its handler was very special.