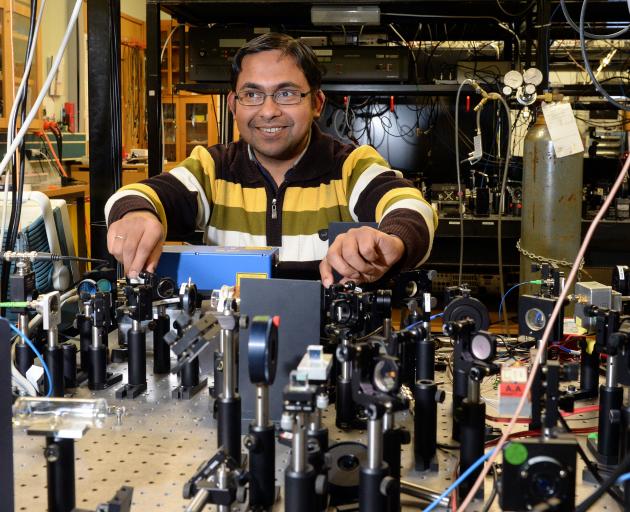 Physicist Dr Amita Deb (pictured) and his colleague Associate Professor Niels Kjaergaard have been awarded a $60,000 grant to develop a camera that can take photos through objects. PHOTO: LINDA ROBERTSON
A flash of brilliance has secured a pair of Otago physicists a $60,000 grant to develop an invention which will allow photographs and videos to be taken through solid objects.

Associate Prof Niels Kjaergaard and Dr Amita Deb have won the 2018 Otago Innovation Proof of Concept Competition, and the pair envision their invention being used in the military and in medicine.

Otago Innovation, develops and commercialises the University of Otago's intellectual property, awards the grant every year.

Dr Deb, an Otago Research Fellow who has a PhD in atomic and laser physics from Oxford University, said the pair had been developing the idea for about a year and a-half.

Both researchers were ``excited to be working on it'', he said.

``To take the technology to the next stage, that is really cool.

``We are hoping that [the project will be finished] about six months from now, and we can hopefully file for some patents,'' Dr Deb said.

There were some ``really important gaps'' in existing technology that the invention could address, he said.

Dr Deb said he first became interested in the idea due to his love of digital technology.

He said normal photography involved a camera shutter opening and exposing the camera's sensor to light - which did not work when there was an barrier to light in the way.

Their proposal converted a type of electromagnetic wave that could pass through objects into a format that could be detected by a camera.

It would be able to categorise materials ``and things like that'', he said.

Dr Deb said he would be juggling the project with other research projects, and with teaching.

This is only the second time someone from outside the health sciences division has won the Proof of Concept grant in the competition's 12-year history.

Second place this year went to another team of physics researchers, Dr Sam Lowrey and Associate Professor Zhifa Sun, who put forward a proposal aiming to improve the efficiency of heat exchanger units in domestic and industrial settings.