By David Loughrey
6 Comments
Dunedin's one-way cycle lane network and subsequent changes to traffic and parking are things residents will have to adapt to, officials say.

The project has developed separated lanes through central and North Dunedin, and followed cyclist fatalities on the one-way system in 1998, 2005, 2011 and 2012.

A count of cyclists on the lanes this week showed they are being used, but NZTA regional relationships director Jim Harland said he would like to see more. 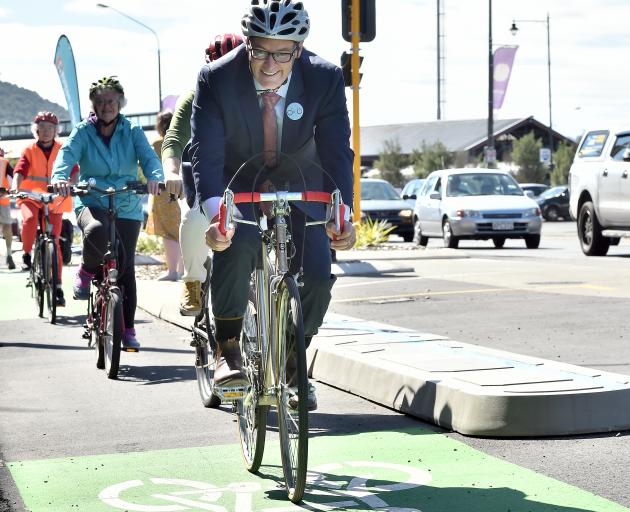 Dr Clark said anyone who cycled regularly had their own stories of "dices with death''.

"We do need to do better as a country at making walking, cycling, and other environmentally-friendly modes of transport safer,'' he told a gathering to mark the occasion.

"Changes being made on our one-way system will make our system safer.''

Dr Clark noted the concrete islands separating cyclists on the system, which carried about 25,000 vehicles a day, were movable, and it could be modified when the new Dunedin Hospital was built.

Dunedin deputy mayor Chris Staynes said whenever there was a perception the council was taking something away from motorists "we all get bombarded by unhappy people''. 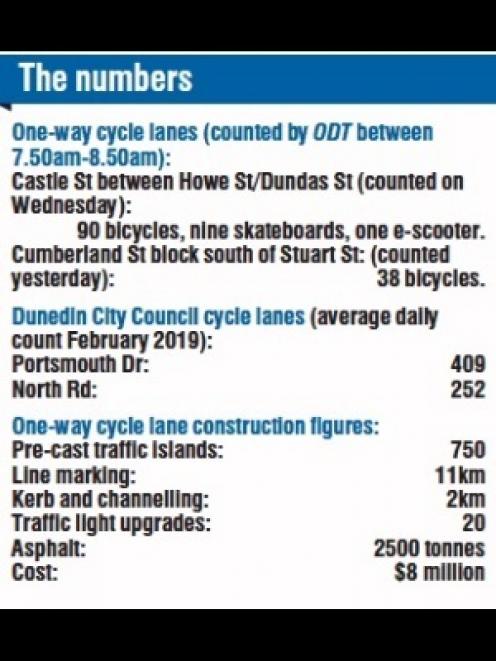 He said people would have to adapt.

"I think we have to make these moves as a city.

"We want to encourage more people to cycle as an everyday transport option.''

The council was working to offset parking loss that resulted from the cycle lanes.

This week the Otago Daily Times counted 90 cyclists using the lane running south on Castle near Dundas St in one hour between 7.50am and 8.50am, and 38 in the same time period travelling north towards Stuart St on Cumberland St.

Mr Harland described that as a good start, but hoped it would get "a lot higher''.

The cycle lanes had only been built recently, and he hoped the numbers would increase.

On the backlash from drivers on the issue, he said adapting to the new situation, and having to look out for other modes of transport, would also take time.

Good to see the arrogant stupidity goes on, these cycle lanes should and must be removed from the one ways, every one of those idiotic concrete blocks should be ripped up an taken to the beaches as a water break to help stop South Dunedin from floating out to sea,good to see that Harland telling the truth for a change about the amount of people using them virtually nobody and that is'nt going to change.

Wow Staynes does have a voice, I just thought he was collecting his wages. No Staynes remember you work for the rate payers and you yes you and other councillors need to start to listen to the rate payers of Dunedin and understand they have emailed you for a reason, My mother is 80 she can't ride a bike Dunedin is hilly and cold it rains. Lets hope the people of Dunedin your comment, remark and vote you and the other arrogant people out.

Much of the cycle way concrete is moveable.....a crushing plant would be a good start. The lumps at Duke St intersection are a good example. Try driving over them
but watch your tyres and suspension.

So who pays for this madness?, that's right the ratepayer. Some who don't cycle eg pensioners and the infirm, they see their rates go up year after year to pay for harebrained pc schemes.
It's hard enough paying for the increasing cost of living and they are forced to pay for this as well.

This mob are just deluded. There simply are multiples more people just clamoring to ride their bikes to and from work. And taking a count on one nice summers day is not representative of mid winter use.
But it won't stop them chasing their personal programs, not matter what other things Dunedin really needs being ignored. Drains and sewerage, a tip they didn't notice is a bit full and a totally dysfunctional council that thinks a C grade is wonderful.

Good to see you are showing the negative comments,well done ODT,and believe me these are just the tip of the iceberg for these cycle ways and the blatant stupidity that goes with them, the sooner the council realizes this the better,and do as they are damn well told.