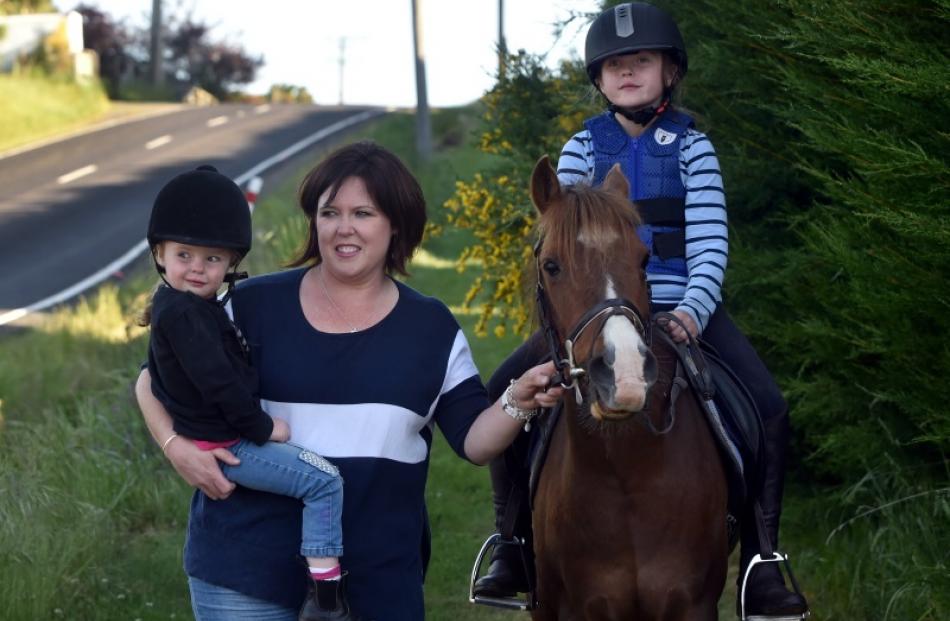 Leah Wilson and daughters Emma (3) and Katie (8), on pony Pluto, walk in Dalziel Rd, Dunedin, yesterday near the site of a proposed new Halfway Bush subdivision. Photo by Peter McIntosh.

A group of Dunedin residents is concerned a proposed subdivision will destroy their slice of rural paradise on the edge of the city.

The residents - some of whom live on lifestyle blocks - are calling on the Dunedin City Council to decline a resource consent application for a 30-site subdivision - called Westacott Heights - in Dalziel Rd, Halfway Bush.

A consent hearing for the subdivision, being developed by Paterson Pitts Group, is being held next week and 20 of 29 submissions made on the consent application were opposed to the subdivision.

Among those opposed is Dalziel Rd resident Leah Wilson, who called on the council in her submission to deny the consent, so the area's rural feel was protected.

''We have been residents of this area for many years now. We specifically bought in this area as it provided us with the rural lifestyle we had chosen to live and raise out family in,'' she said.

''We believe that a further subdivision of 30 properties will significantly affect our business and take away from the unique location that we currently have.

''Not only will views be affected, but traffic, lighting, people and dogs will also affect the peacefulness of this area.''

Seven people made submissions in favour of the development, including Jason Whitehead, who said it would provide a ''fantastic'' opportunity for people to live in a well-thought-out subdivision.

Others who made submissions in favour said the existing zoning of the area as ''rural'' was out of context with the surrounding areas, which were residential.

Many of those opposed, including Ms Wilson, expressed concern about traffic safety, saying Dalziel Rd, which had no footpath, was already dangerous enough.

Council planner Lianne Darby agreed with those concerns in recommending consent be declined, saying Dalziel Rd was narrow and that a lack of roadside berm meant pedestrians, cyclists and horse riders had to share the road with vehicles.

However, since Ms Darby wrote her report, Paterson Pitts Group has altered its plans so that access to most of the proposed lots would be from Taieri Rd, with only nine having access from Dalziel Rd.