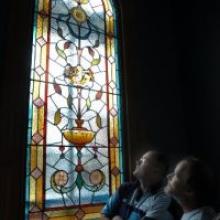 The newly restored stain glass window of Mr Kennedy's Port Chalmers home. Photo by Peter McIntosh
The ‘‘heart'' of a historic Port Chalmers home is back in place, after falling into disrepair that left it in danger of breaking.

A large stained-glass window in the two-storey Currie St home of Blair Kennedy and Andrea McSweeney was in such bad condition before it was removed for restoration, a few more days in place could have seen it destroyed.

The window was built in the 1890s by Robert Henry Fraser, a man its restorer, Peter Mackenzie, said was one of the best-trained stained-glass window-makers in Dunedin, and possibly New Zealand.

But rotting wood and the rigours of time meant it was moving in and out up to 7cm in strong winds.

‘‘If we had not got it out it would have found its way out by itself,'' Mr Mackenzie said.

As well, it had pieces missing and broken panes.

Mr Kennedy, the head of the Kings High School art department, has been restoring what had been a ‘‘reasonably derelict'' home, with an interesting history, since he bought it 12 years ago.

He understood it was built by the owner of a pool hall at a time the port would have been overrun with sailors from around the world.

The owner died in a fire at his business. His wife and three daughters, who never married, stayed at the house until the 1940s, and their old-fashioned attire - they wore bustles and carried parasols - caused some to accuse them of being witches.

Mr Mackenzie said the window was ‘‘very, very carefully'' removed, then recreated in his studio. The seven-week restoration job included both putting it back together, and replacing a ‘‘medallion'' lost from the window's centre with a design that was historically relevant.

Fraser had done much work in Dunedin, he said. ‘‘A lot of the big mansions in the city would have his work.''

For the medallion, he chose a maritime theme in Fraser's renaissance ornament style. The window was returned to the house at the weekend, to Mr Kennedy's obvious delight.

‘‘The stained-glass window is the heart of the house,'' he said.