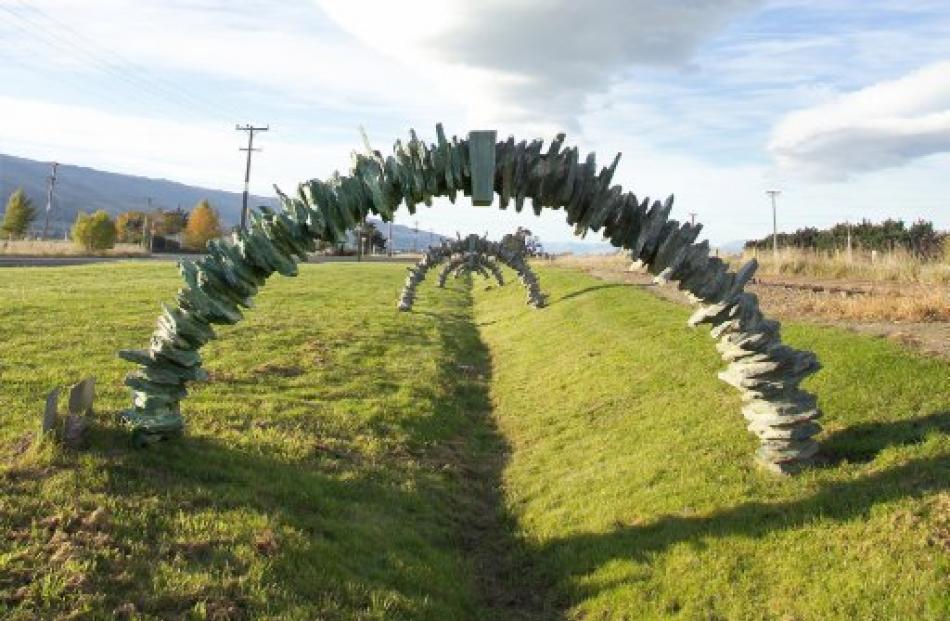 Stone Arches, near Middlemarch, 1998, by Rebecca South and Jesse Stevens, was commissioned under the original council sculpture in public places policy. Photo by Bill Nichol. 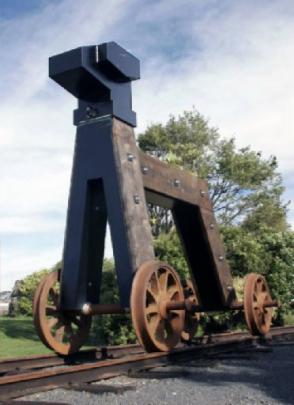 While Kuri/Dog , 2008, by Stephen Mulqueen, was commissioned under the present policy. Photo by Gerard O'Brien.

The Otago Sculpture Trust suggests it might be time for the Dunedin City Council to take a step back from such direct involvement in sculpture in public places.

In light of the controversy, particularly over the past two years, regarding installation of sited public art works in Dunedin, we, the Otago Sculpture Trust, feel it is our role as an independent body of professionals to add our voice to the debate, in the hope of creating better understanding around issues of public art here.

The Otago Sculpture Trust was established in 2002 by a group of practising sculptors with a general aim of doing what we can to foster and develop sculptural practice across Otago and beyond.

The trust seeks to promote public sculpture in its many forms, including accessing resources and influencing public art policies as a lobby group.

Public spaces are important to people. Sculpture adds value to public places via the interaction and response of people.

Some community involvement in the selection and placement of public sculpture is a vital component of a sense of public ownership.

Anomalies between the original and current Dunedin City Council art in public places policies have perhaps accounted for the deterioration in community liaison.

In 1994, the council adopted the sculpture in public places policy which included in its aims to;

• "involve communities, artists and planners within the development of specific sites where the creative articulation of space was timely and appropriate and of value to the community involved.

• "grow confidence, investment and ownership in the Public Art Policy, its processes and the works created as result of those processes".

In 1996 the first sculpture was commissioned under this policy.

The process involved approaching a local community (at St Clair in this instance) to form a focus group and select a site in collaboration with the council.

Artist submissions were then called for and a shortlist of three were funded to develop their concepts. These were then publicly displayed for three weeks and voting took place.

Boat, by Ruth Myers, was selected. This policy became so successful that communities began to approach the council requesting subsequent commissions.

A criticism of this policy might be the notion that art by committee or by consensus can sometimes lead to uninspiring work. The policy was a work in progress, and after review it was replaced with the "Art in Public Places" policy.

In section two, People, the new policy states "the key principles that this policy adheres to about people and art are that:

• Art is a way of valuing people and their communities.

• Art is for people and must be accessible.

• Art reflects who we are.

• Art is a tool for building relationships between developers, communities and arts practitioners.

From one extreme to the other it would seem. Over the past four years, a council art in public places subcommittee has placed two sculptures (three if you include Haka Peep Show) under this policy.

Is there really anything fundamentally wrong with Dunedin's recent policy?

We've had some good sculpture and some "appearing out of nowhere". And we have had a great deal of public annoyance.

Debate needs to be constructive and surprise can be energising in a positive way; people now are visually more astute thanks to a greater range of influences.

We believe that the strongly negative opinions expressed by some people are not the opinions of everyone.

What would encourage a more inclusive process for selecting our public art works? Perhaps we can have constructive debate both before and after works are commissioned and placed.

Is it time for the council to take a step back from such direct involvement in sculpture in public places?

The Queenstown Lakes District Council and the Wellington City council have both successfully done so. In both cases the respective council provides seed funding to a not-for-profit art or sculpture trust, which obtains additional funding through donations and sponsorship and commissions public sculpture.

The Otago Sculpture Trust in its current form cannot take on this governance role.

In 2002 Dunedin the Otago Community Trust published the Hudson Report which it had commissioned.

The report was a culmination of many meetings of a focus group comprised of gallery directors and curators and the council Community Arts Advisor of the time.

Their thorough report proposes the formation of the "Southern Sculpture Foundation" and in great detail outlines the role of the foundation and how it would operate.

Unfortunately none of the recommendations could be implemented because of financial restraints of the time.

With recent publicity surrounding public art in Dunedin, perhaps a group of respected and influential people can be persuaded to accept the exciting challenge of providing Dunedin with public art, public art which delights and helps to tell our stories, while acknowledging it has the important role of stimulating discussion, and challenging expectations of the public.