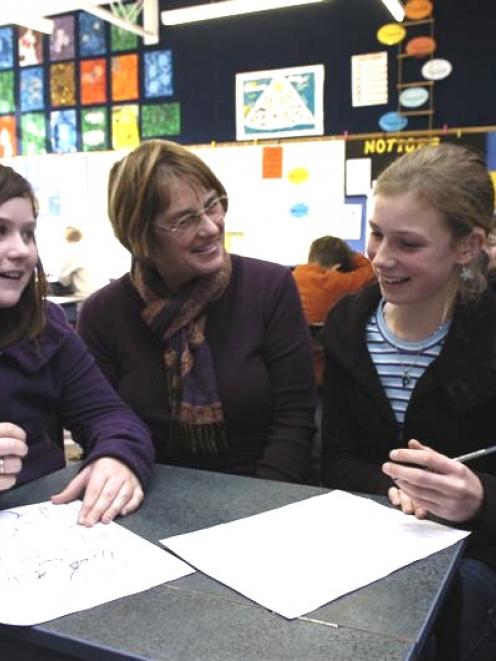 Mrs Selbie has been principal at the school for the past 15 years and recalled how "green" she felt on her first day in the position.

"I came here as a very raw recruit. I've had to learn on the job.

"The hardest thing under Tomorrow's Schools for me was the property development and finances which became part of a principal's job. I look back now and wonder how I survived.

"The kids help you through it. Their bright, smiling faces are a good reason to come to school each day."

While there had been many changes in education during the past 44 years, Mrs Selbie said little had changed about the children she taught.

"They are the same now as when I first started teaching. They're irrepressible and concerned with their own needs."

However, life had become more complicated for children and there were more distractions such as cellphones, iPods and the Internet, she said.

However, advances in technology meant children could access a wealth of information more easily than children in the past.

"They're very fortunate for that."

Mrs Selbie said she had mixed feelings about retiring.

Although there was a tinge of sadness, Mrs Selbie said she was looking forward to taking a year-long trip around the United Kingdom, France and Italy next year with her family.

"It's my geriatric OE. I didn't get to go overseas when I was younger."

Despite her departure from Port Chalmers School, she will not stray far from the "pit-face of the education system".

She will be running a New Zealand Reading Association Conference in Queenstown in September next year and will continue to be a curriculum leader, helping schools implement the revised curriculum.

Mrs Selbie said she was also considering studying for a PhD, which would look at ways of allowing children to have greater voice in their learning.

Port Chalmers deputy principal Vicki Nicolson has been appointed the school's new principal and will begin next term.

The board of trustees is looking for a new deputy principal.

Mrs Selbie said she had made an honest attempt to do her job well and hoped she had left Port Chalmers School better informed about where they were going in the future.

"You only stand on your record," she said.